Expectations matter a great deal in the way the economy evolves. When, how and why did this come about? It must have been linked to the capitalist growth take-off, because why would the future be relevant if nothing much ever changed? Emily Nacol’s An Age of Risk: Politics and Economy in Early Modern Britain links it to the British Enlightenment – specifically to the philosophy of Hobbes, Locke, Hume and Smith. She argues that they presented the future as a territory of risk in order to support their arguments about the political and economic order. What’s more, the book says, there were two sides to this: risk as a source of threat to manage and risk as an opportunity for previously unexploited profits. “When the cautious citizen acts with the future in mind, he transforms his social world in the process, now and in the future,” she writes. Hobbes created the fear, Locke introduced the tools of probabilistic calculation, Hume argues for calculated and prudent risk-taking as a path to profitable opportunities which will pay off in the long term, and Smith analyses how institutional structures can manage and mitigate – or exacerbate – risk, in Nacol’s schema.

The book is quite short but does presuppose familiarity with the four philosophers – my wider reading of their work dates back to the late 1970s and PPE, although I dip in reasonably often, so it was a bit heavy going. Having said that, the key insight about the Enlightenment as the moment when thinking about risk, an orientation toward the future, became important is interesting. Especially at what sometimes feels like a moment of anti-Enlightenment when nostalgia for an imagined (and imaginary) past has overtaken us. Time to re-read Paul Krugman’s brilliant 1991 QJE paper on history versus expectations. 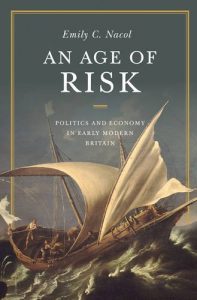