Yesterday was the formal launch of the new, independent Industrial Strategy Commission – of which I’m a member. Its chair Kate Barker explained in an article in the FT today why an industrial strategy is important: “Economic theory has always stressed the role government must play in correcting “market failures”. These include the absence of markets for new goods, social benefits in excess of private benefits where there are externalities, the public good of basic research, and uncertainties that will limit private investment due to information asymmetries in financial markets. Clear economic and social challenges lie ahead for the UK that are not going to be solved unless this government and its successors set a strategic direction and stick to it.”

Next to hers was an article by Janan Ganesh, dismissing (very stylishly) the whole thing as a bad idea: “The dread is that clamour for a New Economy — a more scientific, less London-centric Eden to justify the two-year slog of EU exit — will cause these interventions to grow from the fiddly to the invasive without gaining a jot in usefulness.”

There are many reasons she’s right and he’s wrong, and some of them were set out at the launch by speakers including Carolyn Fairbairn, director general of the CBI, and Juergen Maier, UK CEO of Siemens. They include the obvious fact that governments do all kinds of things that affect the economy – education, training, standards, infrastructure, research funding – and they might as well be joined-up and strategic as not. There are lessons to learn from past mistakes, and there will be new mistakes. There will also be massive lobbying and – as Ganesh says – it’s important to make sure post-Brexit Britain has a tough competition policy to enable new entry into markets. But it’s lazy thinking to conclude “markets” should be left to get on with it. After all, that’s the approach since 1980 that has left us with productivity a quarter lower than France or the Netherlands.

Many of the more positive reasons are set out in a book I’ve been reading, Efficiency, Finance, and Varieties of Industrial Policy edited by Akbar Norman and Joseph Stiglitz. The opening chapter by Mario Cimoli and Giovanni Dosi makes very effectively the case that ‘industrial’ policy is more important in a knowledge economy than in an ‘industrial’ economy: the non-rival character of knowledge increases both the potential benefits of complementarities and network effects, and the extent of co-ordination problems. One of the interesting features of the book is that it covers policy in developing as well as developed economies, so introducing a wide range of discussion of institutions – one of the absolutely key issues in making a strategy to address co-ordination problems a success. 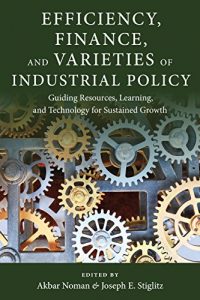 4 thoughts on “Should economic policy be joined-up and strategic – or not?”