It’s been one of my obsessions for some years that the UK economy is damagingly, dangerously, London-centric. Well, the polity as well as the economy; I argue here in a new VoxEU e-book with my colleague Prof Rob Ford that the ‘anti-Brussels’ Brexit vote can be considered an anti-Whitehall and anti-Westminster vote. Anyway, for years I’ve been working with people in Greater Manchester to chip in my small contribution to the city devolution agenda. This has started to bear fruit in the city devolution agenda, given real momentum by George Osborne in his time as Chancellor, and continuing with the forthcoming election of a Greater Manchester mayor.

One of the people at the heart of Manchester’s long campaign for the devolution of economic power, and political accountability, is Mike Emmerich. Now running his own company (Metrodynamics), Mike spent 20 years in public service, latterly in Manchester, where he played a pivotal role in bringing about the devolution revolution. He has written a terrific book about this important moment in the life of the country’s cities – and the nation: Britain’s Cities, Britain’s Future. The book is the latest in my ‘Perspectives‘ series, so clearly I loved it enough to publish it, with my partners at LPP. Setting that aside, though, the next few years are going to be a challenging time for the UK as the government sets about getting the worst possible Brexit deal (or so it often seems).

Even without this impending upheaval – the UK’s economic record has been pretty dismal, our level of productivity stubbornly much, much lower than in the other big OECD economies, the regional disparities among the widest in Europe and a substantial ‘left behind’ population in terms of both income and geography. Whatever we’ve been doing in terms of economic policy hasn’t been a terrific success. Mike’s book makes a persuasive case for taking advantage of recent signs of urban renewal in the big cities outside London and ensuring that the momentum continues. He blogged about it here if you want a foretaste of the book. 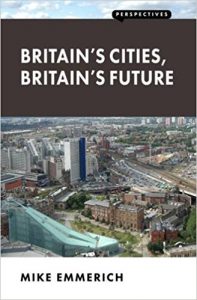