Elizabeth Popp Berman’s Thinking Like an Economist: How Efficiency Replaced Equality in US Public Policy, is a historical account of how a broad spectrum of policies set in Washington DC became – from the 1960s – increasingly determined by the criterion of economic efficiency. As she points out (& as I do in Cogs & Monsters), this notion of efficiency is far from value-free, although many economists (and others) insist that it is.

One distinctive aspect of the book’s account is its focus on the centre and left as the source of this economic thinking. Often the dominance of economics in policy decisions is attributed to the Chicago School, or neoliberals, or the Reagan/Thatcher administrations with their emphasis on markets everywhere. I think the book makes a convincing case that the economics turn started earlier, and gained important momentum from the drive to use government programmes to address social problems. The book focuses therefore on microeconomic issues – competition policy, cost benefit anaylsis – rather than the macro battle of monetarists vs Keynesians.

The transition it is interested in is the shift from pre-1960, indeed pre-war, institutionalist economics: “Institutionalism emphasized the collection of quantitative data, but with an inductive, historical approach in mind.” It avoided formalism, and tended to be progressive. Post-war, however, the institutionalists in Washington lost influence over time to two groups highlighted in the book: economists from RAND’s economics division and from new schools or programmes of public policy that trained a growing number of officials in “RAND-lite” formal modelling approaches; and anti-trust and I/O economists who – even before the full flowering of the Chicago School – brought neoclassical economic analysis emphasizing the role of markets in allocative efficiency in place of earlier structuralist approaches. The former group grew at pace during the Great Society years, along with more policy institutes evaluating social programmes. The Reagan years cemented the role of economic thinking by adding more cost benefit analysis of government interventions, favoured by business to limit ‘interference’ in their actions.

As the concluding chapter points out, there emerged a divergence on partisan lines in terms of the embrace of economic thinking: Democrats consistently embraced it and “allowed the economic style to define the boundaries of legitimate policy debate.” But Republicans “continued to use the economic style strategically and fleixbly, embracing it where it helped advance their goals and rejecting it when it conflicted with more fundamental values.” I wonder if there is a less on here for the centre-left now?

The book is entirely US-focused; it would have been interesting to read some reflections on how the economic style spread internationally. The other element I missed was the interaction between economic thinking in government, and how economics itself changed over the postwar period. How did the role of economists in policy-shaping contribute either to the rational epectations era of the late 70s/early 80s, or the later applied turn? Having said that, it’s a nice study of how ideas work in policy, and the key point about the consistent embrace of economic-style thinking by the left contrasted with the intellectual flexibility (cynicism?) of the right is very interesting. 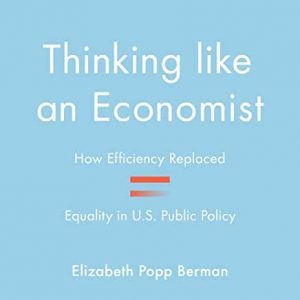 One thought on “How economists think”