Vili Lehdonvirta’s Cloud Empires is a terrific book. As the title suggests (and the fashionably chatty subtitle spells out just in case), the subject is the political power of large/gatekeeper digital platforms and specifically how in their essential rule-making capacity they are steadily taking on more activities of the state – but doing so without a public service motive (profit instead) and without accountability: “The internet was supposed to free us from powerful institutions. … Then they delivered something different – something that looks a lot like government again, except that this time we didn’t get to vote.”

The book starts with the origins of the internet and digital platforms, including the early libertarian hopes. The first section concerns platforms as economic institutions. One focus is the operation of online labour markets, including mTurk, but also using oWork/Upworker as a case study; the platform become increasingly internally regulated as it grew, among other things setting a minimum wage – of $3 an hour, reflecting the globalisation of online labour. Another chapter concerns privacy, and its complete erosion as platforms increasingly grappled with the need to enforce social order online at massive scale.

The theme through this first section is the transition from libertarian optimism about the absence of control to a non-territorial but nevertheless tightly regulated series of platform domains, with platforms setting their own rules within their own jurisdictions – with the only accountability being people’s ability to leave. You might put it that Albert Hirschman’s ‘exit’ is the only option as neither voice not loyalty have any traction, and even that is limited by the power of network effects. Exit would have to be collective to be effective.

The second section concerns the political power of the platforms. It starts with a wonderfully astute chapter on crypto-currencies, making the point (it has always seemed clear to me but seemingly not to others) that these are not ‘trustless’ but simply relocate trust. And yet many or most are inherently untrustworthy (to use Onora O’Neill’s framing). “The crypto elite who run these organisations are, if anything, less accountable to people than conventional financial and regulatory elites.” The founders may be entirely sincere and nice, and they may even seem to give their communities voice, but in writing the take-it-or-leave-it code, they impose dictatorship. (And have clearly read none of the vast literature on incomplete contracts….) Other authors such as Lawrence Lessig have drawn the comparison between code and law, but I found the social science perspective here very helpful.

Another chapter considers the way the platforms have undermined the traditional public institutions providing health care and education. Neither platforms nor gig workers have an incentive to invest in training or a long-term relationship, and in the US at least that casualised workforce has to rely on GoFundMe campaigns to cover medical bills. “Internet empires are undermining industrial society’s mechanisms of building and maintaining human capital.” What will the essential social safety net look like in the platform economy?

The concluding chapter pulls the threads together in the argument that platforms are usurping the traditional nation state. “Silicon Valley technologists reinvented the economy only in the sense that through trial and error they rediscovered much of what states already knew. Instead of revolutionizing our social order, they reimplemented it with computer code.” Algorithms are bureaucracy. (And indeed, a lot of traditional statecraft depended on technology – including classifying and collecting data, monitoring behaviour). The book argues that states simply gave up some of their former territory of control through outsourcing, or ceasing to collect data in house. In addition, the digital platforms have advantages – they are fast and efficient, and in (narrow) ways provide a great service.

So what to do about it? The book makes the case for an online bourgeois revolution to develop collective action power that will make digital platforms accountable. I must say that the prior chapters don’t give me any optimism that might provide effective. My prescription would be for democratic states to regain the lost territory through a combination of rule-making over online activity and improved efficiency of traditional bureaucratic states. Though I’m not too optimistic about that either.

All of which makes the book an essential read. I have some quibbles (for example, I’d disagree that platforms are effective central planners), but perhaps I’m wrong. The book is firmly rooted in Vili’s own work and the wider literature on digital platforms, spanning economics, sociology and political science, while being very readable with lots of examples and case studies. A strong recommend. 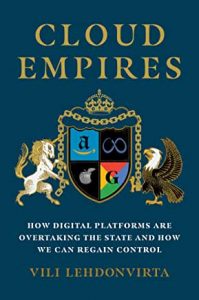