It’s back to routine tomorrow, with too many (>0) Zooms in the schedule. Still, I’ve been making the most of the extra reading time since New Year, and have now polished off Duncan Weldon’s Two Hundred Years of Muddling Through. This is an aptly-titled economic history of Britain since the dawn of the Industrial Revolution, a story of accidental successes and forseeable failures, told with verve.

War features prominently in the story, as it would any industrialised nation’s economic history. Raising taxes to fight wars paved the way for the expansion of the franchise and growth of the state. And the legacy of war, either financial or physical, shaped much of the 20th century’s economic history. The distinctively British parts of the experience are the long shadow of the landowning aristocracy and our dysfunctional politics, giving us a uniquely warped political economy with a ruling class running the entire country as if it were a colony (See Tom McTague’s marvellous recent article in The Atlantic on this.)

I’ve grown interested in the role of the Treasury in this, having sort of read (only sort of because reading online) a fascinating Kings College London PhD thesis by Tom Kelsey, Picking Losers: Concorde, nuclear power, and their opponents in Britain, 1954-1995. His research established the effective internal Treasury opposition to these postwar efforts to stay on the frontier of technologies the US did not clearly dominate: what we got was a shadow of what ministers had planned. (Although of course the great counterfactual is what would Britain’s role in the computer industry have been were it not for the UK gestablishment insisting on secrecy postwar as the Americans did not, and were it not for their persecuting Alan Turing.) Anyway, I’d have liked a bit more about where the consensus around economic ideas in UK policy came from, as these shifted over time. (And is there a long-view history of the Treasury looking at how it has preserved a largely consistent culture and worldview over centuries? Today’s fiscal hair shirtism inside that building is wholly consistent with the decision to go back on the Gold Standard, for example.)

This is a terrific book to recommend to 6th formers and students who know little economic history. When I was a student there was a gap for just such a book – Sked & Cook’s Postwar Britain: A Political History came out during my undergraduate years. I had a 1958 book, British Economic Policy Since the War by Andrew Shonfeld. (Both hard to find now, but still on my shelves.) Robert Skidelsky’s magisterial biography of Keynes wasn’t published yet though I read the Roy Harrod one. We are now blessed with many histories particularly of the 20th century – David Edgerton, Correlli Barnett for instance – albeit with a more detailed focus. Two Hundred Years of Muddling Through is a lively, clear and balanced overview of British economic history, & I wouldn’t hesitate to recommend it. 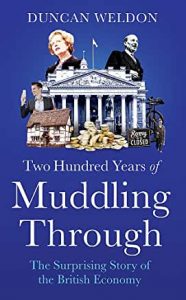