What is the scientific method? How does science advance? Why did modern science emerge when it did about 300 years ago? Will it continue? All questions addressed by Michael Strevens’ interesting and enjoyable The Knowledge Machine: How an Unreasonable Idea Created Modern Science.

The book begins by setting out two competing theories about the scientific method: Popper’s claim that scientific knowledge progresses through falsfication of hypotheses and Kuhn’s even more famous claim that it occurs through revolutionary changes in paradigm. These are incompatible explanations – if falsfication happened, how could scientists hold on to an incorrect paradigm – and both wrong, the book argues. The falsfication hypothesis not states that ‘facts’ are only tentatively true, always vulnerable to falsification – so we can be no more confident that the sun will rise today (Hume’s induction problem) than that a human born today will live forever. The paradigm revolution hypothesis seems to rule out progress or at least doesn’t account for why the scientific community jumps from one paradigm to another with better predictive power. Strevens is even more critical, though, of the radical subjectivists who argue that there is no scientific method, that science is fundamentally all about the status of scientists, how they exercise power within the scientific institutions so that certain ideas come to dominate.

It is not that scientists are not subjective, he says; of course they have personal priors in evaluating evidence. However, the key point is that in the official public discourse in scientific publications and seminars is that there is an iron rule: only empirical evidence with predictive power counts. The evidence will often be microscopic or concern minute differences in measurement: much scientific endeavour is super-dull, detailed collection of measurement. Scientists have to be trained to have a high tolerance for this painstaking work, because it is the only way progress happens – much as in their private lives they are fascinated by the big philosophical theories or the beauty of the universe. In scientific debate, “Victory does not come through smooth rhetoric, metaphysical inquiry, moralizing, or any other sort of sweet talking or big thinking. To win, players must front up with meticulous observations.” The subjectivists, the book argues, overlook this actual scientific method – which was cemented as the way to do science by Newton.

Is this immensely successful scientific method secure? The book ends with a section on the need to retrain every genertion of scientists in this approach – dull meticulousness in disciplinary debate whatever their private philosophical flights of fancy. And on the need to sustain the institution of modern science in the face of the challenges facing humanity today, from covid to climate.

It’s a very enjoyable book, with plenty of stories of science past and present. The argument certainly persuaded me. Economics differs substantially in that the social processes we investigate do not generate data in the same way as physical or biological ones, but the ideal method is the same: of course we bring our own values to evaluating evidence but it is the evidence that wins the official disciplinary debate. We cannot ultimately be objective and impartial but we can and should set objectivity as the standard for evaluating claims. So I recognised the book’s description of the iron rule as the way researchers (try to) operate. And similarly, I reject the subjectivism of those who say economics should be pluralistic – can only be so – because there is no way of testing claims against each other. 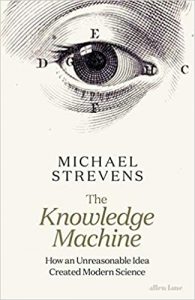 My other reading this week has been Behold, America by Sarah Churchwell. Having been comforted by the arrival or President Biden, the book got me worried all over again about the long and strong roots of American fascism – shocking and startling photos of the swastika flying in Madison Square garden rallies. The book analyses the histories of the slogans America First and the American Dream – tracing the more-or-less constancy of the first (white supremacy) and the evolution of the second (from an evocation of equality and civic participation to a claim about material prosperity) through newspapers and other records. Along with this evidence about the persistence of populism, perhaps we should stay worried. 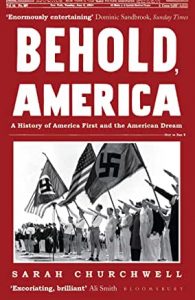 One thought on “Experts and values”