The title had slightly put me off the new book by David Bodanis: The Art of Fairness: The Power of Decency in a World Turned Mean. I’m not in the mood for self-improvement, given that (a) it’s January, always the worst month of the year and (b) it’s lockdown – so more in the mood for gin and chocolate. Despite my rather truculent seasonal despondency, though, I really enjoyed reading it.

The title is misleading, I think. The book seemed to me to be really about the power of making sure you get the widest range of information possible, by listening to enough people with respect and treating them well enough that they say what they think – while at the same time retaining enough scepticism about their motives. Not so much ‘do as you would be done by’ fairness, more ‘efficiency wage’ fairness – the way you treat people structures their incentives. There’s also a flavour of Team of Rivals about the argument: if you don’t listen to your opponents, or those who disagree with you, reality will bite you at some stage.

The author has his own views, though, and describes this as fairness, or as decency.  The book is structured into two halves. The first is a series of stories about effective leadership, divided into exemplars of the three skills of listening, giving and defending. Most of these are not well-known people – such as Paul Starrett, who won the contract to build the Empire State Building, or Ursula Bower, a British woman who led a team of hill tribe warriors in the mountainous North of India against the Japanese in the second world war. These tales are told crackingly well, and I raced through these chapters.

The second half works a bit less well, although still a compelling read. It starts by contrasting Goebbels and Roosevelt when young, the experiences that shaped them and how they responded, and broadens out into why Roosevelt’s leadership paved the way for the Allied victory and America’s postwar success. Perhaps it’s inherently hard to get the optimal focal length when so many volumes have been written about both men and about the war.

The book then ends with a very nice section of ‘readings and reflections’, a reading list with notes providing a sort of meta-commentary on the theme of decency, or how to be a good leader (one of Aristotelian virtue) in any context.

All in all, highly recommended. It certainly cheered me through a couple of grim January evenings. 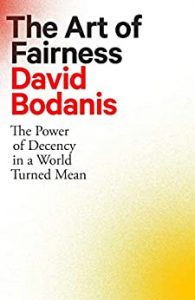