There’s a torrent of material to read about competition (lack of) in digital markets, which of course goes much wider than economics and law. Indeed, I’ve contributed to the many pages written, including in the form of being a member of the Furman Review team. The general theme is that Big Tech does indeed pose a challenge for competition policy, with the individual conclusions running from ‘some adjustment within current framework is needed’, all the way to ‘destroy them’.

What makes Big Tech and the Digital Economy by legal scholar Nicolas Petit so refreshing is its absolutely contrarian perspective. He has coined the phrase ‘moligopoly’ to describe Big Tech, and argues that while there has certainly been increasing competition in digital markets, there is also vigorous competition unremarked by all the commentators. I’d describe what he calls competition as oligopolistic rivalry, but the book does document the ways in which the GAFA and others compete with each other.

Some of the emprical evidence is rather interesting. For example, the book looks at what the big companies describe as the major risks facing them in their SEC filings and all but Facebook claim competition is their 1st or 2nd biggest threat – they would say that of course, but it intrigues me that Facebook doesn’t bother (number 4 or 5 in its ranking). The others do all see each other as their main rivals. Among the book’s other evidence is their high rate of spending on R&D – but I’d like to know about what it is they’re researching, though.

The ultimate question is not about current competitors, however, but about potential competitors. If you believe digital markets tend to winner-takes-all because of network effects, and you can live with concentration because of the large consumer benefits, then what matters is whether new rivals with great technology and products can take the current Big Tech markets. In that case, moligopolistic rivalry along various dimensions is not only fine but anyway inevitable.

The book didn’t win me over in the sense that I concluded there is no reason to be concerned about digital competition. Without intervention, it’s hard to see anybody rivalling Google in search, or Apple and Android in mobile operating systems. To be fair, the author doesn’t argue that there’s no cause for concern, quite. He is issuing a useful warning that we should think carefully and in detail about what harms we believe Big Tech is causing. This book is a distinctive corrective against the current tendency toward groupthink on this subject. As we said right at the start of the Furman Review, Big Tech has brought many benefits, and there is growing evidence about how much people value its products. Anyone certain they know Big Tech needs fixing should read this more nuanced argument with an open mind. 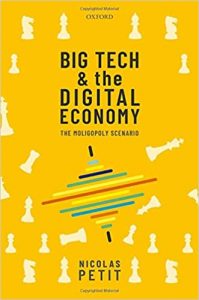 One thought on “Big Tech – the contrarian view”