This essay, The Long History of Algorithmic Fairness, sent me to some of the new-to-me references, among them How Reason Almost Lost its Mind by Paul Erickson and five other authors. The book is the collective output of a six-week stint in 2010 at the Max Planck Institute for the History of Science in Berlin. That alone endeared it to me  – just imagine being able to spend six weeks Abroad. And in Berlin, which was indeed my last trip Abroad in the brief period in September 2020 when travel was possible again. I started the book with some trepidation as collectives of academics aren’t known for crisp writing, but it’s actually very well written. I suspect this is a positive side-effect of interdisciplinarity: the way to learn each other’s disciplinary language is to be as clear as possible.

The book is very interesting, tracing the status of ‘rationality’ in the sense of logical or algorithmic reasoning, from the low status of human ‘computers’ (generally poorly-paid women) in the early part of the 20th century, to the high status of Cold War experts devising game theory and building ‘computers’, to the contestation about the meaning of rationality in more recent times: is it logical calculation, or is it what Herbert Simon called ‘procedural rationality’? This is a debate most recently manifested in the debate between the Kahneman/Tversky representation of human decision-making as ‘biased’ (as compared with the logical ideal) and the Gerd Gigerenzer argument that heuristics are a rational use of constrained mental resources.

How Reason… concludes, “The contemporary equivalents of Life and Business Week no longer feature admiring portraits of ‘action intellectuals’ or ‘Pentagon planners’, although these types are alive and well.” The arc of status is bending down again, although arguably it’s machine learning and AI – ur-rational calculators – rather than other types of humans gaining the top dog slot nowadays. As I’ve written in the economic methodology context, it’s odd that computers and also creatures from rats to pigeons to fungi are seen as rational calculators whereas humans are irrational.

Anyway, the book is mainly about the Cold War and how the technocrats reasoned about the existentially lethal game in which they were participants, and has lots of fascinating detail (and photos) about the period. From Schelling and Simon to the influence of operations research (my first micro textbook was Will Baumol’s Economic Theory and Operations Analysis) and shadow prices in economic allocation, the impact on economics was immense. (Philip Mirowski’s Machine Dreams covers some of that territory too, although I found it rather tendentious when I read it a while ago.) I’m interested in thinking about the implications of the use of AI for policy and in policy, and as it embeds a specific kind of calculating reason, thought How Reason Almost Lost its Mind was a very useful read. 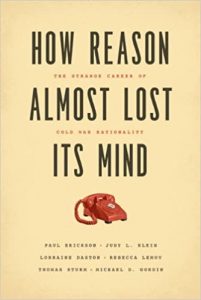 One thought on “Are humans or computers more reasonable?”