I’ve spent the past few weeks absorbed in preparing a book manuscript (out next year I hope…), so here is an all-in-one round-up of recent books read (non-fiction – a few Maigrets and also Smoke and Ashes by Abhir Mukherjee slipped in too).

Uncanny Valley by Anna Weiner is a readable memoir of a young non-tech woman’s experience of moving from the publishing industry in New York to marketing in Silicon Valley. Her account confirms expectations & she seems to me to capture that tech world culture pretty well. The book doesn’t name names of companies (or people) but describes them well enough that it’s clear who they are – which is a bit annoying. Other than that, I enjoyed it. 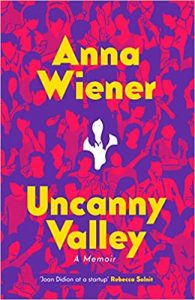 Twilight of Democracy by Anne Applebaum is a terrific book, also with elements of memoir (the subtitle explains – the parting of friends). It’s a short account of how the respectable right in a number of countries – Poland, Hungary, US, UK – turned into the authoritarian-heading-toward-fascism right. She essentially tells a tale of second-rate people grabbing opportunities to dethrone those at the top – “the elite” – so they can enjoy the spoils themselves. Looking at the US in the days since I read this book, it’s hard to feel any optimism about where it’s heading. As for us, ominshambles with menaces seems to have become a constant. 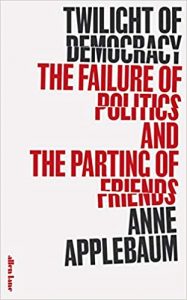 96,196 Words: Essays by Emmanuel Carrere. A random purchase – I’d never heard of this French journalist. Perfectly readable essays, albeit with more about his sex life than I was really interested in. 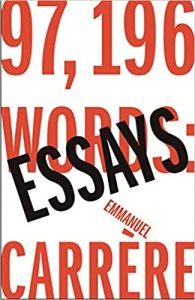 The Code by Margaret O’Mara is a terrific history of Silicon Valley exploring the reasons tech happened there, having started much stronger around Boston. If you’ve read a lot of history of tech (I have) some bits of this are very familiar. But she puts together a persuasive story of how several factors combine – happenstance, Stanford’s presence, defence spending helping other local firms like Lockheed, a few investors to seed the VC scene, and networks of people who know people developing and becoming embedded over time. It thoroughly undermines the idea that any one intervention – set a mission! create a DARPA! – will create an extraordinary burst of innovation. It’s a much more contingent story. 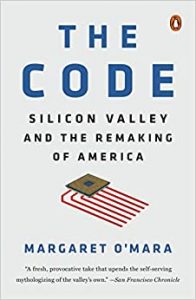 And non-economics books: Diary of a Young Naturalist by Dara McAnulty and House of Glass by Hadley Freeman.

Of all of these, the Applebaum and O’Mara books would be my top recommendations.