I just read Enrico Moretti’s (2012) The New Geography of Jobs, having not done so before now because I’d read quite a lot of his papers. Anyway, now I have and it’s very good. It’s a nicely accessible survey of the literatures on trade/tech and jobs, and on the geographic aspect – the concentration of skilled people in cities and growing divergence. The evidence it cites is entirely US-centric but the drivers obviously apply elsewhere, even though their effects in other countries are not exacerbated by the  unattractive features of US society. So I would recommend this to anybody who would like a readable big-picture overview of what has been happening to jobs and incomes in recent decades. The major irritation is that the notes aren’t flagged in the text & you just have to root around at the back of the book to see if a given statement has a reference attached to it.

The conclusions are a little bleak in terms of policies to address the growing divergence between rich skilled places and the left-behinds.Being in the right place matters. There are spillovers between people, so even as a graduate you do better in terms of earnings the more other skilled people are around you, but non-graduate occupations also have higher earnings in high skill places.

Overcoming the gaps requires a Big Push, the book concludes (I like this allusion to Rosenstein-Rodin, although that literature doesn’t seem to be cited here). Only governments can do these, given the amount of co-ordination involved. Many interventions are just too small scale to have a hope. Looking at the Big Push of the Tennessee Valley Authority, Moretti and his colleagues concluded it was successful in raising productivity in the region but not wages, because the labour supply increased as workers moved in from elsewhere. However, a couple of pages later, he points out that the prominent successful clusters of today did not come about because of a Big Push. Most were organic developments, albeit aided of course by government investment in R&D or defence – see Margaret O’Mara’s book The Code on Silicon Valley which I described in the previous post.

So this is rather sobering. My hunch is that policies will need to rest on a better understanding of the relationships between human capital investments (a college degree is the key variable seemingly driving so many outcomes from earnings to voting pattern to subjectove well-being), social spillovers, intangible assets, amenities including nature and housing, and produced capital especially communications infrastructure. In other words, what assets are there available to people living in in a given place, and to what extent do these complement and substitute for each other?

Anyway, I enjoyed the book even if it left me feeling a bit glum. 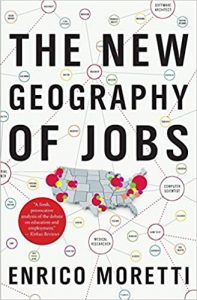 2 thoughts on “Geography as destiny”