I went into my office on Friday to pick up some books out of their quarantine, mainly things i need to get papers written, but I also rescued Changing Times: Economics, Policies and Resource Allocation in Britain Since 1951 by Martin Chick. I’ve torn through it, a very interesting book.

As the subtitle indicates, it’s a history of postwar economic policy in the UK, ranging over six decades and issues spanning industrial policy, macro and trade policies, environmental, labour market, health and education policies. It’s also only 400 pages, to give an indication of the quite long focal length it necessarily requires. Given this broad span, the structure of the book is provided by the theme of time. Time in two senses: how policies relate to the distribution of economic welfare between generations; and the importance of assets, stocks as well as flows, and in particular the state’s withdrawal from investment in the future over this period.

This doesn’t 100% work as a thematic structure but it is nevertheless extremely interesting to reflect on some familiar trends and episodes in postwar economic history through this lens. Chick also draws on a huge range of the economics literature in order to cover the various policy areas, and has obviously spent hours in the National Archives reading Treasury papers and other policy documents. (Indeed, by the <6 degrees of separation rule, he lodged with my in-laws while staying at Kew to do the archive work.)

My favourite chapter was the one on privatisation of state-owned industries, which politely eviscerates the rationale for the policy. As Chick writes: “What was perhaps under-appreciated at the time of privatisation was the historical novelty of trying to induce large sunk investment from utilities operating in competitive markets.” After all, profit rates in the utilities sector are never spectacular. He goes on to interpret nationalisation as being “preferred to regulation as a means of extracting for consumers the benefits of improvements in productivity.” Privatisation was introducing risk into areas “from which it had been absent for decades”, the risk of costly, lumpy investments not delivering an adequate return, and technological risk – as well as altering the distribution of returns.

However, there is loads of interest in every chapter even for someone who has read a lot of the economic and political history of this period. For instance, the London smog of 5-8th December 1952 is thought to have led to the deaths of 4000 Londoners, a staggering number. Yet it wasn’t until 7 months later that the government even appointed the Beaver Committee on Air Pollution. The same chapter on environmental policy is super-interesting on the relationship between stocks and flows of different types of natural asset – fish vs oil.

Chick concludes the book: “Considerations of time and space affect all of the major issues of concern today (housing, utility output, global warming, infrastructure, educational opportunities, access to healthcare, trade, the internet and so on).” I have quibbles about the book – for instance, it would have been nice to replace dense paragraphs describing data and trends with some charts. But in the end, what’s not to like about a book with references ranging from Derek Parfit and Frank Ramsey to articles about the Cod Wars of the 1970s or technical reports on council house sales? 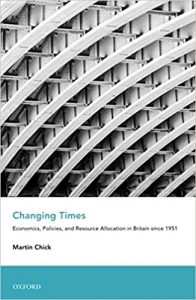