In August we’re going to have a week’s holiday, and I’ll also be declining all but the most absolutely urgent online meetings, so am looking forward to some reading. The pile of books to read is very satisfying.

Meanwhile, this week I’ve enjoyed the newly-published Boom and Bust: A Global History of Financial Bubbles by William Quinn and John Turner. The book recounts the history of 10 bubbles in history, some well known – the South Sea Bubble, Wall Street in the 20s – others less so – I for one had never heard of the British Bicycle Mania of the late 1890s. It also ranges from 19th century Australia to modern China.

Each episode is set in the context of a framework described in the first chapter, the Bubble Triangle. These are the three necessary conditions for a bubble to take off: good marketability of the assets involved; abundant money & credit; and large numbers of speculators. With these in place, they argue there are two potential sparks: technology (radio in the 1920s, bicycle innovations in the 1890s) or politics (often, governments seeking to engineer higher asset prices to meet a policy goal, such as encourgang home ownership (the early to mid 2000s) or reducing government debt (John Law in France in the 1760s).

This is a very nice framework, and the book is an enjoyable read, its large array of references kept unobtrusive while testimony to the amount of research that has gone into it. There are some interesting points along the way. For example, the authors argue that the form of railway network shaped by the railway mania of 1848 locked in inefficiencies “which have plagued British railways down to the present day.” Other, less laissez faire, countries invested in a better planned and less duplicative network at lower cost. In Britain, they argue, politicians were too accomodating to constituency interests rather than able to plan a national network.

However, they also highlight the distinction between bubbles sparked by technology and those sparked by politics: “Technology bubbles often involve large sums of money flowing into extremely innovative sectors of the economy, which might otherwise have trouble getting off the ground.” During political bubbles, the money flows into sectors where there are few positive externalities.

The book ends by returning to the Bubble Triangle as a means of predicting when a bubble might occur and some discussion of policy choices – to avert the bubble (hard, with the political ones), or clean up afer it? The final chapter includes a discussion of the role of the media, whose role during bubbles has not always been blameless.

All in all, a great read and a great addition to the literature on financial bubbles. 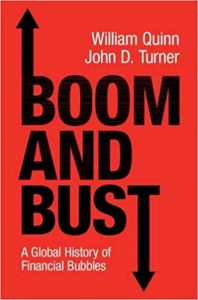