Yesterday evening I learned from his nephew that Peter Sinclair had died after spending some weeks in intensive care battling Covid19. The tide of emails and tweets today, as people heard this sad news, is testament to the overwhelming affection and respect so many feel for him.

My memories are typical of those people are emailing. I pitched up at Brasenose College, Oxford to read PPE at the age of 17, completely out of my depth socially and intellectually, although pretty sure I was going to become a philosopher and sit in a Parisian cafe all day reading and writing. Peter’s absolute vocation for teaching, his brilliance, his kindness, soon turned me into an economist. He’d sent pre-reading before we turned up – Roy Harrod’s biography of Keynes for instance (this pre-dated the publication of the Skidelsky books). In the first term all his students were driven in batches of four for afternoon tea at the Feathers Hotel in Woodstock. One of our group came from Kenya and Peter tried a bit of conversation in Swahili – my first experience with his knowledge of at least one phrase in every language he’d ever encountered.

In tutorials with Peter, even poor essays were kindly treated – one learned to interpret comments such as, “That’s very, very – very – interesting,” as signalling a terrible error. He was a brilliant teacher. His explanation of different social welfare functions is still vivid in my mind. He eviscerated the inefficiencies of the CAP by pointing out that at the time the EEC butter mountain weighed more than the population of Austria. He responded to any sign of mild student interest in anything by sending one off with additional readings, perfectly pitched, and embracing everything from classics to the latest books and papers. He scheduled one-to-one tutorials over breakfast in the cafe in Oxford market if one was very interested. He knew everything: whenever I’ve discussed any subject with him over the years, he was able to cite the entire literature and send me scurrying off to catch up on all the references. In meetings, he would listen carefully to the discussion then chip in with some deep and important point.

Unsurprisingly, his joy in teaching meant he has taught what seems like half the UK economics profession and a fair proportion of economists elsewhere in the world. This continued through his years as a Professor at Birmingham University and at the Bank of England’s Centre for Central Banking Studies. He was a driving force in the Royal Economic Society’s educational initiatives including the easter school for PhD students. Just before his illness and death he was writing chapters for a new online Office for National Statistics text on economic statistics – Joe Grice, who has known Peter for 50 years since his doctoral days at Nuffield, will shepherd those now.

We celebrated Peter’s formal retirement with a dinner in 2012 hosted by the then CEO of Standard Chartered, Peter Sands, with dozens of economists attending. There will be crowds at his memorial service, when crowds are allowed by this cruel disease to gather again.

For all his decisive influence on my intellectual formation – not just turning me into an economist but shaping my values and world view – I will always remember Peter’s kindness and warmth. It is a patient and loving person who puts up with a long-ago pupil and her young children dropping in for lunch at the Bank of England canteen. He was always genuinely delighted to see people.

Peter was devastated by the death of his first wife, Shelagh Heffernan, after her long illness. We were all overjoyed when he later found such happiness marrying Jayne Ivimey. My heart goes out to Jayne and all Peter’s family. 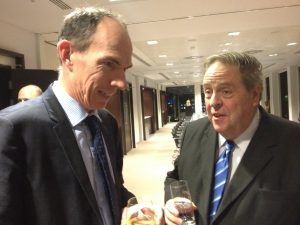 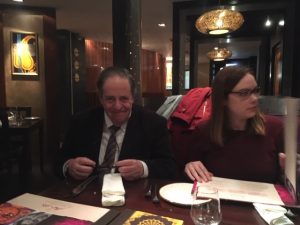 Peter at the University of Birmingham a few weeks ago