It has been unsurprisingly hard to concentrate this week, but I did finish Everyday Chaos: Technology, Complexity and How We’re Thriving in a New World of Possibility by David Weinberger. Publishers love thise long subtitles and with one so long you might think there was no need to read the book. This one does the author a disservice. The book is nothing like the giddy Silicon Valley techno-optimistic tract it seems to indicate (and how badly that would have dated in current circumstances). I’d bill it as a follow-up to two much earlier books – The Cluetrain Manifesto of 2000 (of which Weinberger was a co-author) and Kevin Kelly’s 1992 Out of Control.

Everyday Chaos is concerned with the implications of AI everywhere and the always-on internet. It’s broad hypothesis is that the business environment and world more broadly need to take complexity seriously: “At last we are moving from Chaos Theory to chaos practice.” (Chaos Theory being the flapping butterfly in one place causing a hurricane across the world thanks to the non-linear complex dynamics of weather systems.) That means expecting small interventions to sometimes have huge consequences. It implies organisations need to be ‘agile’ (ie flexible), open, less hung up on causality and more willing to live with (shifting) correlations.

It’s particularly interesting on the flexibility of the concept of interoperability, which can be made to build bridges between organisations in different ways. The book advocates a “networked, permeable” view of business rather than the hard boundaries we are used to thinking about. “The knocking down of old walls that were definitional of a business is better understood as a strategic and purposive commitment to increasing a business’s interoperability with the rest of the environment.” Rather than narrowing down to a small number of strategic options, Weinberger’s advice is: “In an interoperable world in which everything affects everything else, the strategic path forward may be to open as many paths as possible.”

The book also reminded me about the very interesting work by Andy Clark and his argument that our tools – pen and paper, whiteboard, screen, spreadsheet – determine how we think (this is a terrific New Yorker profile and here’s a famous paper with Dave Chalmers on the ‘extended mind’). Knowledge is a function of what’s outside our heads. As Weinberger concludes, we are neither an effect of thing (technodeterminism) or nor to we straightforwardly cause things. new tools – machine learning – will end up with us understanding the world in a different way.

Everyday Chaos is also really well written and engaging, so it’s well worth ignoring the airport bookshop packaging. Not that there will be many chances to buy in airport bookstores for quite a while… 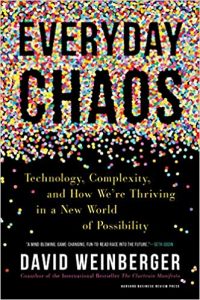