Thank goodness for some beautiful sunshine yesterday. We’re lucky enough to have a garden so I spent Sunday afternoon outside reading Sheila Jasanoff’s 1990 book The Fifth Branch: Science Advisers as Policymakers. If life goes back to something reasonably normal, I’m hoping we’ll be able to welcome her to Cambridge in the autumn. The issue of the role of scientific advice and scientists in policy decisions felt topical a while ago when we planned this kind of discussion; my goodness it’s topical now.

The book was researched and written during and after the initial Reagan assault on the legitimacy of government to regulate business. US politics was starting to polarise between free market, small government attitudes on the one hand and growing concern about environmental standards and other social issues on the other hand. In modern societies, the scope of areas where technical regulation is needed or useful is large. This context made the role of the expert adviser both more influential and harder to imagine as being completely impartial. It has also of course enabled some business lobbies – the ‘merchants of doubt‘ – to exploit the fact that scientists disagree about certain issues, even if majority opinion is clear. Although much of The Fifth Branch traces the tension in this specific American context – and particularly with the US adversarial legal tradition – it is now evident everywhere.

One of the threads runnning through the book is how scientists themselves act to establish their authority, the ‘boundary work’ to establish who is an expert to whom people (especially policymakers) should listen. Jasanoff also writes about the emergence of ‘science policy’ as distinct from science in academic or laboratory contexts, there being some important distinctions. Apart from the greater need on the part of policymakers for the state of knowledge rather than new work at the frontier, science policy incorporates some of the constraints of policymaking in the expert knowledge – for example, an understanding of what is politically feasible or what trade-offs policy decision-makers have to take into account. Decisions have to be made even if scientific evidence is inconclusive or not universally agreed in the expert community.

The growing band of experts advising government, as the complexity of societies increased and hence the need for technical input, constitute the ‘fifth branch. Michael Lewis’s terrific book The Fifth Risk (blog post here) alludes to this. He describes the destruction by the Trump Administration of the body of and access to scientific advice in the US now. It was a terrifying book even before the pandemic – for instance, this includes the nuclear experts safeguarding the stores of radioactive material in the western US. The Talking Politics podcast has an updated discussion here.

It is going to be interesting to see what happens to people’s trust in experts now. On social media there is some discussion among people realising that epidemiologists use models, and models whose predictions are highly sensitive to assumptions – in particular to the assumption of how widespread the virus is in the population. Will the post-pandemic era, whenever that is, lead to a re-evaluation of the epidemiologists’ authority? It will all depend of course on how things turn out.

One thing that’s clear is that – just as some economists predicted the 2008 financial crisis but never swayed the weight of opinion among financial policy-makers – some experts predicted a global pandemic but their warnings were not enough to get governments to prepare. As the Bennett Institute’s Steve Unger writes in this blog post, it’s hard to keep the sense of urgency about high impact but rare crises going for long in government. Now, though, thinking about ‘expertise under pressure‘ couldn’t be more timely. Any government would wish not to need science advice as much as they need it now – but they do, with all its uncertainties. 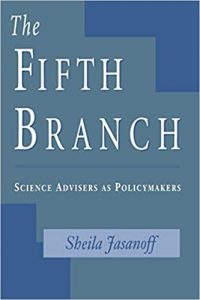