Summer, with its leisurely hours for reading, seems a long time ago. I have managed Barbara Kingsolver’s excellent novel Unsheltered. And also, discovered down one of the by-ways of Twitter or the Internet, Worlds Hidden in Plain Sight, edited by David Krakauer. This is a collection of columns by researchers at the Santa Fe Institute dating back to its establishment in 1984.

SFI is of course the best-known centre for the study of complexity across disciplinary boundaries, and its work on economics is always at least intriguing and often far more. Like any collection of essays this is a mixed bag. One striking feature is how much more focused the later ones become on the social sciences and the humanities, compared to the earlier focus on biology and physics. I don’t know if this is an artefact of the selection or actually reflects the balance of work there, but it’s also obvious I suppose that human activity and society is inherently complex. A few of the essays – although intended for a not-entirely-specialist audience – are utterly incomprehensible to someone who isn’t a disciplinary expert. I suspect one or two were also incomprehensible to their authors. And the most recent batch consist of some disappointingly banal essays for a newspaper.

In between, however, I found much food for thought – particularly on the lessons at disciplinary borders: information science, economics, anthropology, biology…. As one 2011 essay by Krakauer puts it, we have to recognize that “many of our most pressing problems and interesting challenges reside at the boundaries of existing disciplines and require the development of an entirely new kind of sensibility that remains ‘disciplined’ by careful empirical experiment, observation and analysis.”

What else? There’s a brilliant 2009 essay by Ole Peters, entirely justifying the cost of the book, explaining in a few pages with great clarity why ignoring the non-ergodicity of economic and financial variables has led to catastrophic policy errors. A 2012 Robert May essay alerted me to a calculation I’ve not spotted before by Ben Friedman (my thesis adviser) that before the crisis running the US financial system “took one third of all profits earned on investment capital,” up from 10% three decades earlier.

And I’ve been thinking about information – the way ideas and imagination, not mechanical or physical constraints, limit social progress; and puzzling how the role of information in energy use and social complexity, a running thread. One day I’m going to have to get my head properly around information theory.

Like all collections, this book has the merit of being easy to dip into and read in chunks. It’s a great overview of the work of SFI, one of the most interesting research centres anywhere. More power to their elbow. 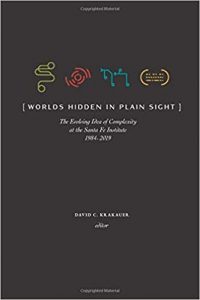