There aren’t many books I give up on because they are literally unreadable. Shoshana Zuboff’s The Age of Surveillance Capitalism was one recent example, however. Joining this club is a book I saw recommended somewhere The Four-Dimensional Human: Ways of Being in the Digital World by Laurence Scott. I got three chapters in, and yet still have absolutely no idea what it’s about. Example: “Networked hive life has sensitised us to the many silent silences that this environment contains [which environment??]. We feel them [the silent silences??] when they last longer than we can bear, which is a wildly variable threshold. We understand their many vintages and provenances [?] We can smell them in the air [?? silences??], and sense them pushing against our thighs, or lying limply in our hands [!!]. We stare them in the face and they stare back.” This is after an extended bee hive metaphor so maybe the ‘them’ are bees and not silences, but I’m not sure that helps.Is it something about digital that encourages such verbiage

It was shortlisted for the Samuel Johnson prize and was a Sunday Times ‘thought book of the year’ and described as ‘a nourishing counterpoint to the ephemeraility of the digital gae by the Financial Times. So it’s probably me. Still, not recommended, I’m afraid. 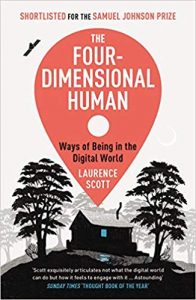 One thought on “Digital verbiage”