I’ve thoroughly enjoyed reading Adaptive Markets: Financial Evolution at the Speed of Thought by Andrew Lo. I should say that, apart from being a distinguished MIT finance professor and the co-author of the classic A Non-Random Walk Down Wall Street, Andrew is an old friend. But this should not put off any readers. This new book will become another essential read for anybody interested in financial markets.

The book aims to do what ultimately all of economics must do, and situate economic decisions and behaviour in the context of our biology and evolutionary history. Behavioural economics and finance have gone some way toward this in introducing the now-familiar heuristics such as loss aversion and framing effects, and herding is a familiar phenomenon in finance models. The issue with these has been how if at all they relate to rational choice models and the Efficient Markets Hypothesis. The Adaptive Markets Hypothesis is a synthesis, proposing that context makes the difference, and when conditions are sufficiently stable for long enough, financial markets are efficient. Otherwise, fear, greed, fairness, imagination – the characteristics evolution has given the human brain – kick in.

The opening chapter starts with a powerful demonstration of the potential efficiency of markets: after the Space Shuttle Challenger tragically exploded on 28 January 1986, a five month inquiry pinned the blame on a part, the O-ring, manufactured by one of four contractors, Morton Thiokol. Yet on the day of the accident, the share price of Morton Thiokol plummeted – the markets knew the company was to blame almost immediately, without the expert verdict: “Somehow the stock market in 1986 was able to aggregate all the information about the Challenger accident within minutes, come up with the correct conclusion and apply it to the assets of the company.”  The decline in its market capitalization – about $200m – was  almost exactly equal to the damages, settlement and reduced future cash flow, a later study found.

But often, of course, financial markets are all too obviously sometimes not efficient. The intellectual challenge is to figure out when they are in which mode. The book voyages through neuroscience, psychology, evolutionary biology and AI to try to answer this. The Adaptive Markets Hypothesis reverses the conventional framing: rather than thinking about a rational benchmark with a set of psychological quirks sometimes kicking in, we are a collection of quirks, but sometimes we can get beyond the heuristics to rational choice.

Frustratingly, although perhaps inevitably, there is no neat list of conditions for being in efficient rather than non-efficient mode: it depends, in particular on having had enough time in stable conditions to learn from experience. But Andrew does hold out hope for the prospects of being able to make better investment decisions – with socially useful outcomes – and being able to manage financial markets better so events like the 2008 crisis are far less likely to recur. In line with the Adaptive Markets perspective, he argues for treating financial markets as an ecosystem (so the interconnections are front of mind), using AI techniques to monitor markets and adjust regulatory instruments such as cyclical buffers. There is an interesting section on the role of technology in finance, including HFT, a technological arms race being one of the predictions of the Adaptive Markets Hypothesis. Currently, he is exploring ideas from biology such as immune responses and ecosystem management techniques. He also recommends introducing a body similar to the National Transportation Safety Board that would analyse market crashes and make recommendations for regulatory change. (One thing not spelled out here is whether this would have to be a global body.)

The book is a thoroughly interesting and enjoyable read. It is not technical, the explanations are super-clear, and there is some excellent story telling. Andrew recounts how in 1986 he and his co-author Craig MacKinlay, presenting at the NBER the work that turned into A Non-Random Walk Down Wall Street, were savaged by discussants from the world of academic finance. Since then, the academic community’s faith in the Efficient Markets Hypothesis has wavered significantly, but it is still the benchmark – as the book says, it takes a theory to beat a theory. I find the Adaptive Markets Hypothesis a persuasive theory, but then I firmly believe economics must be consistent with what we learn about ourselves from the other human sciences. I guess the test will come in the shape of how widely market participants themselves embrace it. 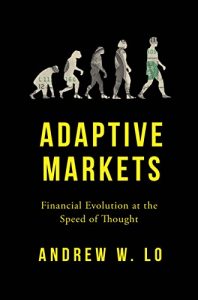 One thought on “Fear, greed, fairness, imagination and finance”