For reasons too lengthy to go into, I just read In Defence of History by Richard Evans (first published 1997). It’s a spirited counter-attack on the post-modernist/structuralist attack on history, particularly its most extreme versions. Consider for example Barthes’ claim that history is, “A parade of signifiers masquerading as a collection of facts.” Evans argues that postmodernist historians make the false claim that ‘traditional’ historians naively take historical documents at face value, whereas they are well aware that the degree of transparency of historical texts varies: to pit naive belief in the documents against knowing relativism about texts is to create a false duality.

Richard Evans has been back in the news as he acted as an expert witness for the High Court in the trial portrayed in the new film Denial. As he has noted on Twitter (@RichardEvans36), this account of the court battle between disgraced Holocaust-denier David Irving and the historian Deborah Lipstadt is extraordinarily timely. His book seems newly timely as well in the post-truth, alt_facts era; history is shaped by the present but not only by the present, and the search for truth is meaningful. As he tweeted again earlier this month: 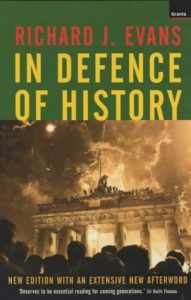 One thought on “Truth is possible – and important”