Since Thomas Schelling’s death was announced I’ve been (re-)reading some of his work. Today it was one of my all-time favourite economics books, one I always recommend to students, Micromotives and Macrobehaviour. As the title suggsts, it’s all about how individuals’ behaviour aggregates, taking account of how social influence. The final chapter, Hockey helmets, daylight saving and other binary choices, starts with a discussion of why hockey players (I think it means ice hockey) won’t voluntarily wear helmets even when everyone knows it’s much safer to do so.

The answer is that each individual would like to be required to wear a helmet but won’t be the first to do so because it might give them a small disadvantage against others in play, and would also get them mocked by their opponents. The chapter goes on to argue that when there are any situations with a binary choice in the face of externalities, either the ‘rational’ behaviour needs to be mandated for a social optimum; or a tipping coalition needs to form, whereby a number of individuals will act together to bring about the better outcome, all the while cursing those who still hold out.

Once you read the book, it’s hard not to see everything through a Schelling lens. A friend of mine helps the Close The Door campaign. High street stores often leave their doors wide open in winter – even though they are burning energy wastefully and exposing themselves to more shoplifting. Why? Because they fear that if they close their doors, they will lose impulse shoppers to neighbouring stores that keep their doors open. I tried to get the Department for Business etc. (in one of its precursor variants) to see the logic and regulate to keep shop doors closed. The senior official – an economist I know and respect – said to me, “But what’s the market failure? The shops would all keep their doors closed if it were really in their interest.”

The answer is in Micromotives and Macrobehaviour Chapter 7. If only all economists would read it. 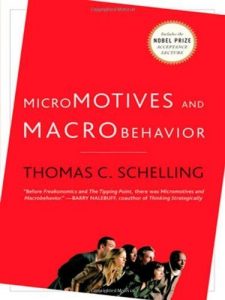