I’ve managed to resist reviewing Richard Baldwin’s new book The Great Convergence: information technology, trade and the new globalization until now, and it has taken serious self-restraint as the book is so relevant to (among other things) the Brexit debate. I would for one thing force every Cabinet member to read it and not allow them to keep their jobs unless they could pass an exam based on it. Anyway, the book’s published on 14th November and now it’s November my self-denying ordinance can end.

The Great Convergence offers a compelling framework for thinking about how trade is organized and why and how it benefits whom. The first part is a historical overview of trade leading up to the first, the Old Globalization or the 19th century. This phenomenon, due to steam power reducing trading costs, industrialization and a context of relative global peace led to the Great Divergence: the major economies of Asia, which had been richer than the West, fell behind, dramatically so over the course of two centuries. The New Globalization, since the 1980s, driven by the new information and communication technologies, has taken the rich countries’ share of global output back to its 1914 level in little over two decades. China is the standout story, going from uncompetitive in 1970 to 2nd biggest in the world by 2010, but other rapidly industrializing nations in the New Globalization are Korea, India, Poland, Indonesia and Thailand (ie. a different group from the notorious BRICs).

However, as the book goes on to document, the New Globalization is a completely different kind. Trade over distance has three costs: the costs of moving goods, ideas and people. When moving goods got cheap, the first explosion of trade occurred, but ideas were costly to move so the innovations of the industrial revolution were not easily exported. The Old Globalization was the result of low shipping costs and high communication costs. ICTs have reduced the latter significantly, so industrial competitiveness is defined in terms of production networks, interlinked supply chains, that cross national borders. Knowledge has been offshored, and the rapid growth in a few previously poorer countries has come about because of their geographical location, close enough to G7 industrial centres that managers can travel there, sharing knowledge within the confines of the production network.

This means the New Globalization happens at the level of stages of production and occupations. This makes it harder to predict who will be affected – which jobs will be offshored, which areas most affected. “Nations are no longer the only natural unit of analysis”. Much of the book describes a new data set making it possible for economists to begin to explore the ‘value added’ pattern of trade created by the switch from trading finished goods toward trading components in global production chains. The picture is going to be utterly different – the famous example being the iPhone which is sourced conventionally as a Chinese export to the US but where the value added is concentrated in the American business and the Chinese import a lot of the components they assemble and re-export with not much value added at that stage.

This is one insight the Brexiteers need to appreciate, although the Nissan letter suggests at least some members of the government realise the signficance. British businesses are woven into supply chains with our near neighbours: we aren’t importing prosecco and salami so much as gear boxes. Brexit threatens to tear apart these links. If the cost appears to be too high, the multinationals at the head of the supply chains will relocate chunks of their production networks, and won’t care if they’re exporting gear boxes to the Czech Republic rather than Britain.

The book adds: “Twenty-first century supply chains involve the whole trade-investment-service-intellectual property nexus, since bringing high quality, competitively priced goods to customers in a timely manner requires international coordination of production facilities via the continuous two-way flow of goods, people, ideas and investments. Threats to any of these flows become barriers to global value chain participation…” Baldwin adds that the movement of people is still a binding constraint on globalization, and face-to-face communication – and so distance – remain important. He argues that the improving quality of telepresence is changing this, but I think that remains to be seen.

Ultimately, trade policy today is not just about trade nor about nations. It involves deploying the nation’s productive resources through overseas connections. This is why 90% of the economics profession thought, and thinks, Brexit so damaging, and the idea that the UK has more economic self-determination outside the EU a delusion. The Great Convergence is not about Brexit – it ranges far wider. I can’t imagine a better and more accessible analysis of trade and globalization in the digital era. 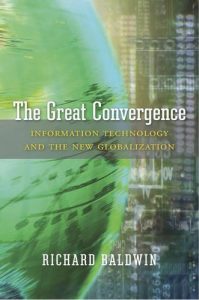