It has been a tough choice, as ever, to pick one winner out of the 14 titles on my longlist. It was a good year and all 14 are terrific books. After days of mulling it over, three contenders became clear. One was Robert Gordon’s The Rise and Fall of American Growth, because even though I disagree with parts of his analysis of today’s economy, it is a brilliant, magisterial work of economic history. All economists should read it. But Prof Gordon has won plenty of accolades for the book already and doesn’t need mine. I really enjoyed also Sam Bowles’s The Moral Economy, on the strengths but importantly the limits of economic analysis based on incentives as opposed to ‘moral sentiments’. 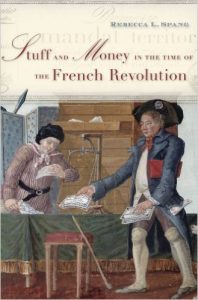 However, the Enlightened Economist Prize winner for 2016 is a book that was enjoyable to read, informed me about all kinds of things I hadn’t known, and is full of insights about the relationship between money and politics, and the nature of property and value. It’s a great example of history helping one think more clearly about the present and maybe the near future. It is Rebecca Spang’s Stuff and Money in the Time of the French Revolution.

Rebecca, if you read this, it means I owe you a nice lunch or dinner if we’re ever in the same place.

One thought on “The Enlightened Economist Prize 2017 – the winner!”