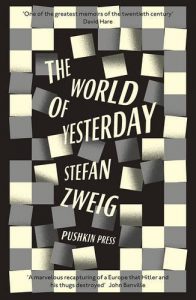 “The will for life to go on proved stronger than the instability of the currency.  … The baker made bread, the cobbler made boots,the writer wrote books, the farmer cultivated the land, trains ran regularly, the newspaper lay outside your door every morning at the usual time, and the places of entertainment, in particular the bars and the theatre, were full to overflowing. For with the daily loss of the value of money, once the most stable aspect of life, people came to appreciate true values such as work, love, friendship, art and nature all the more, and in the midst of the disaster the nation as a whole live more intensely than before, strung to a higher pitch.”

The other message of the book is how quickly societies can change, how almost overnight one normality vanishes, to be replaced by another. This was also the lesson of one of the most powerful books I’ve read, Richard Overy’s Interrogations, a study of the documents related to the interviews conducted with the accused in the Nuremberg Trials. He concluded that the moral universe in which people live can, similarly, change almost instantaneously, so powerful are the forces of conformity that create and sustain social norms. These norms are very strong – until they’re not. This is the lesson too from Joseph Tainter’s work. So – for those of us who live in stable and prosperous places – the message is: never forget that underlying capacity of social order to crumble very quickly.

2 thoughts on “The world of yesterday”