fame) comments grumpily in this Guardian article that he doesn’t believe the figures: “You do see these micro trends of peak stuff, but the idea we’re living in a peak stuff world is nuts.” Not for a moment am I relaxed about the environmental impact of economic growth (and I just joined the Natural Capital Committee because of my belief that we need to do much better at stewardship of our natural assets – see Dieter Helm’s

). Yet I am, you know, pretty happy that this trend is repeated across the OECD and that the UK is doing particularly well in terms of reduced material consumption. 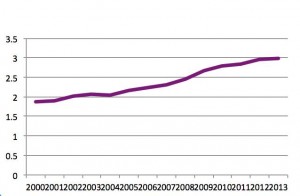