Earlier this week I attended the ONS’s regular Economic Forum, and the recent changes to the National Accounts provided one of the main subjects discussed. The slides included this one showing the old and revised profits of the financial sector in the UK: 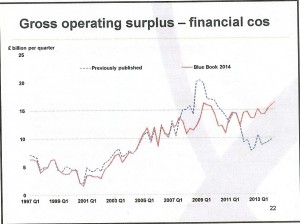 for more on this, and also

by Brett Christophers). Although this does not remove the absurdity that the sector’s biggest contribution to GDP growth came at the end of 2008, as the financial crisis burst upon us, it has led to sensible revisions – including the downward revision in financial sector profitability shown in the chart here, with the new red line below the old blue line.

However. it is equally striking that recent profitability has been revised up significantly, and in the most recent quarter has matched the earlier peak.

This confirms anecdotal evidence (i.e. bankers and business people I chat to) that banks have been taking advantage of low headline interest rates to increase their interest and profit margins. While they moan about the regulatory burden, this doesn’t seem to have affected their profits or bonuses at all. I hope the Competition and Markets Authority will be looking at the new ONS profitability data in its decision about whether to launch a market inquiry into the banking sector – it is due to publish its decision any time. And good luck to Colette Bowe, announced today as the new chair of the Banking Standards Review Body, set up by the banks to make them all behave better – a very impressive woman but a massive task. My firm belief is that the market structure will need to change if the ethics of people working in the sector are to improve; they aren’t all bad people, but they face terrible (from society’s perspective) incentives.

The ONS Economic Forum was full of other interesting information – including news that it will start to publish wider well-being indicators alongside the quarterly national accounts data (the third release) from December. Sarah Connor of the FT has written this up.