James Poskett’s Horizons: A Global History of Science is concerned with the role played in scientific discovery by non-white, non-European people (mainly men….). The book starts with Aztec and Inca knowledge particularly about natural history, medicine and astronomy. The European voyages of the early modern period made it so clear that Aristotle and Plato in fact hadn’t known everything that they helped overturn scholasticism. The book proceeds through the subsequent centuries but also, centrally, across space. People outside NW Europe (and later N America) knew stuff.

I was particularly interested in the section on non-Linnaean classifications in Africa and Asia (being a classification nerd); and also those about the impact of Einstein’s theories on confidence in measurement (being a measurement nerd too). And one other thought – not particularly made by the author, whose concern is acknowedging previously overlooked contributions by people around the world – that it left me with is the role of people who knit together bodies of disparate knowledge in a new world view. After all, Newton acknowledged the shoulders he stood on; but a different metaphor might be that he shook the kaleidoscope and created a new pattern of seeing.

I enjoyed this book, learning a lot. I must say it was slightly marred for me by the continual repetition of the point about needing to acknowledge non-European contributions – the material makes the case so effectively itself that additional polemic isn’t needed. But it is of course an important point, and the book is a nice introduction to some of the sources of knowledge from other parts of the world. 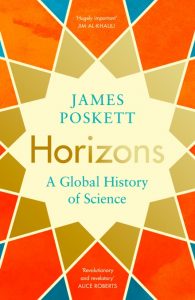 One thought on “Ways of seeing?”