The Committee on the Status of Women in the Economics Profession was established by the American Economic Association in 1971. Its first survey found that just 6.7% of faculty in US universities were women and more than two thirds of them were on the lowest rung of the profession. Gender and the Dismal Science: Women in the Early Years of the Economics Profession by Ann Mari May documents the route to that shameful situation. It is not surprising that in the late 19th and early 20th century women struggled to access higher education and academic jobs, but economics was distinctively sexist in sustaining 19th century practices into the 1970s.

The book uses archival material to document how this came about. Some of the factors were indeed common across disciplines, such as unwillingness to grant women access to PhD studies, or to hire or retain female members of staff who got married. As US universities professionalised, professional associations determined the boundaries of the discipline and regulated access to PhD programmes and the network of contacts these grew. Two aspects of economics seem distinctive, however.

One is the early dominance of professional journals by what are still referred to as the ‘top 5’, which were run by a remarkably concentrated group of men – in two cases, by individual top departments (Harvard and Chicago). This facilitated the rise to status of an old boys network – it still operates as reflected in long-serving editors disproportionately publishing papers by those they know – and the journals still have outsize influence on professional advancement.

The other is the fact that many early female members of the American Economic Association were associated with social reform movements. And of course the subject matter of economics has significant implications for job markets, monopoly power, migration and other politically-contentious issues. But the resolution of early intellectual conflicts within the AEA went against advocacy and in favour of “disciplinary boundaries that made clear the scientific nature of economics.” Campaigning was for sociology, or theology; economics would deal in facts. Female membership of the AEA didn’t climb above 5% from 1890 until 1928.

The situation has improved in the US – or rather, it did in the 1980s and 1990s – but economics remains a male-dominated field. Cognitive narrowness and a narrow range of experience matter for any subject but particularly for a social science with policy influence. May reports on a survey she and co-authors conducted finding that male and female economists in the US and Europe have systematically different views on some issues. It isn’t obvious, ahem, that male views are more correct. At least now both the AEA and the Royal Economic Society are self-aware, and some male colleagues are truly concerned about the continuing evidence of systematic bias. And of course it extends far beyond women to the even lesser representation of people of colour and people from low-income backgrounds.

The historical perspective in this book is an interesting supplement to the recent literature on this structural deformation of the economics profession – both the new empirical documentation of the scale and scope of the problem, and the history of thought approaches that emphasise the desire to be ‘scientific’ (often linked to logical positivism but evidently with roots back in the early days of universities and the emergence of disciplinary boundaries). The data May has assembled on the history of the US profession is a real trove. And the individual stories of injustice make one’s blood boil… 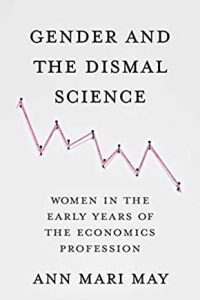