George Demartino kicks off The Tragic Science: How economists cause harm (even as they aspire to do good) with the strong accusation that, “The economics profession is culpable in the contemporary backlash against democratic governance, civic obligation, and racial and other forms of equality. It is equally culpable in inducing the social conditions that promote the widespread rejection of expertise in policy-making.” He describes economists as ‘harm accountants’ while asserting that the profession ignores many of the harms caused by its advice. What to make of this set of charges?

Well, the blame game for contemporary ills is not a straightforward one. I’d share it around – with politicians, with financiers, with crooks – while agreeing that economics has significantly helped create the intellectual weather enabling others’ actions. I also agree with two key building blocks in Demartino’s argument. One is that economists are entirely wrong to insist that the positive and normative elements of their analysis are separable (see Cogs and Monsters): the concept of economic ‘efficiency’ is absolutely value-laden, and in an undesirable way. The other is that welfare economics needs rebooting (we will hopefully have a symposium out on this soon), and in particular to highlight the central dilemma of irreconcilably multiple dimensions (incomes and jobs but also community and culture) in evaluating policy choices at the same time that decisions are unidimensional (does the government sign the trade treaty or not?) Elizabeth Anderson is my go-to reference on this.

Having said that, I thought the book over-does the anti-econ rhetoric. Cost benefit analysis (CBA) is indeed highly flawed, and does indeed aim to come up with a single number weighing all costs and benefits against the same kind of metric, and with moral assumptions shovelled into its discount rate. But “morally reckless”? The limitations of CBA are well-rehearsed, especially by economists (including me but also titans like Nick Stern and Partha Dasgupta). The alternative to using CBA is – not using it. And then what? What decision making procedure is better? I was surprised the book didn’t make more of the arguments for participatory processes, for procedural justice, in trying to ease the many dimensions versus one dimension dilemma. Sen in particular emphasises this, and it’s a feature of public value approaches, which extend CBA to incorporate non-monetary dimensions of the choice, in a reasoned and evidenced framework.

I wasn’t particularly wowed either by the book’s alternative calculus of harms, a page-long list setting out a taxonomy in which economic harms form a minority group. The list seems to be top-down, and it isn’t clear what the principles of categorisation are. Nor does it help address fundamental questions. For instance, many of the examples of the harms done by economists consist of trade liberalisation treaties. There’s no doubt these harm certain groups of producers and workers, to which the standard economics response is compensation schemes – which never happen adequately. Many economists have rowed back from the view that trade liberalisation is always and everywhere a good thing. And yet increasing trade has – equally without doubt – underpinned post-war rises in living standards in many countries, and the Asian export-based miracle economies. Saying, ‘but the China shock in the Midwest, but Brazil,’ doesn’t imply trade liberalisation is always bad, which seems to be the assertion here.

(Personal gripe – the book also ignores Scitovszky’s 1941 refutation of the Hicks-Kaldor compensation argument. Which in my view restates the existence of fundamental dilemmas in policy choices…. the welfare evaluation all depends whose perspective you look at it from.)

So, is economics too reductionist? Yes. Are economists over-confident in their ability to solve problems? Often, yes. Is economics too paternalistic, assuming a god’s-eye view it cannot possibly have? Indeed. Was the shock therapy approach to post-1989 Russia a disaster? Yes! I agree with all of this. And yet I think it’s much more complicated than this book claims. 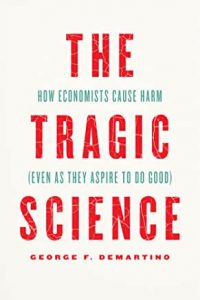 One thought on “Too complicated for tragedy”