A World of Insecurity: Democratic Disenchantment in Rich and Poor Countries by Pranab Bardhan covers territory that will be largely familiar to those of us suckers for punishment who have read books like How Democracies Die or How Democracy Ends. It points out the cynicism of populist leaders who, themselves part of the elite, and busy “conniv[ing] at some pruning of the welfare state” and stacking economic regulation in their own favour, nevertheless blame “elites” for the consequences of their own decisions. It notes the “trampl[ing] of due process and the rules and institutions of representative government.” But it also argues that there has been a growing cultural chasm between liberal professions and blue collar workers, facilitating the blame game played by populists. And observes the massive distributional consequences of massive amounts of QE.

The distinctive aspect of the book is looking at rich and poor countries through the same lens, Modi and India in particular. In all cases, he argues, the way to think about the role of the state is its special role “in pooling and underwriting risk for the masses of people” – a task in which most states have recently failed in the face of immense shocks – with more to come as people go cold and hungry this autumn and winter.

In the context of incompetent populist governments, it’s hard to see how the state will step up to the task. Bardhan places his hopes in labour unions and community organistions. The book ends with a plea not to despair, although it’s a gloomy read. The last sentence is a quotation from the last speech by Rabindranath Tagore: “As I look around I see the crumbling ruins of a proud civilization strewn like a vast heap of futility. And yet I shall not commit the grievous sin of losing faith in Man.” 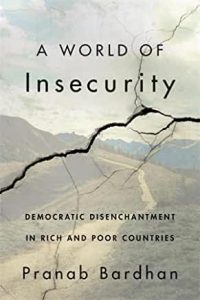