Graeme Garrard’s The Return of the State; and why it is essential for our health, wealth and happiness wears its heart on its jacket sleeve. The title will put off some readers and attract others – it will end up preaching to the converted.

The book – just under 200 pages long – starts out with a necessarily brief account of the swing of the pendulum in the centuries-long political debate between those who think more state is the problem and those who think it’s the solution. I began by thinking this could be a useful introduction to, say, undergraduates who hadn’t come across this history before. I also liked the fact that the book weaves in the role of powerful non-state actors – not just today’s mega-corps but also international mafia and the gazillions of dirty money sloshing around the financial system. The role of the illegal economy is overlooked in mainstream economics – probably because there’s no time series data to download and run regressions on.

However, the book then lost me in a chapter (4) that segues from weak states being the prey of multinational criminal gangs to their being similarly vulnerable to the World Trade Organization, World Bank and International Monetary Fund. Of course there is an imbalance of power between these organisations and a weak ‘client’ government but the implied moral equivalence is breathtaking: “While such agencies don’t use armed force, unlike criminal groups, they wield vast economic power that can be more damaging to the authority of the states who [sic] are subject to it than physical force. Weak states are often squeezed between well-armed criminal organisations within and dictatorial economic institutions without. Both show little mercy…” Both tattoed gangsters and suited officials carrying a briefcase are described as ‘tyrants’. I stopped reading then; this is not a meaningful discussion of the legitimacy or the politics of international organisations.

My other comment (on the first half of the book at any rate) is that the account ignores politics. The pendulum swings because of politics, and states are governed by politicians. Politics inflects what the state deliver and how well it does so. Although I lean toward the needing more state side of this debate in today’s context, it’s hard to be optimistic about the capacity of current politics to deliver. A recent UK survey by ONS showed just 35% of respondents saying they trust the government; turn on the news and understand why. The picture is the same in many OECD countries.

So – a timely and important subject but I wouldn’t recommend this one. 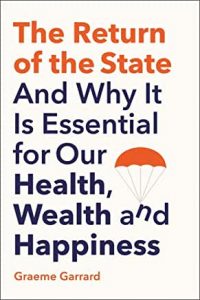