The Rise and Fall of the Neoliberal Order: America and the World in the Free Market Era by my Cambridge colleague Gary Gerstle has quite rightly been highly praised. It covers a whole century, starting with the New Deal and post-world war 2 era to preface the bulk of the book, its characterisation of the neoliberal turn from the start of the 1980s. It ends with Trump and the turn away – so Gary argues – from neoliberalism to something as yet undefined. Neoliberalism is described as a commitment to free trade and financial flows, to free movement of people and openness to others, and to deregulation and the expanded scope of markets. Interestingly, he frames the point about the expansion of the market domain in terms of characterising people as consumers, instead of workers, and argues that Ralph Nader played a key role in this regard through his influence on Jimmy Carter, as the old order started to give way to the new.

The book gives a twin-tracked account of what drives these transitions from one era to another. One set of drivers consists of events – economic crisis in particular, so the 1970s commodity shocks at the start and the GFC at the end. More surprising is the role attributed to the Soviet Union: the 1917 Revolution as a stimulus for New Deal politics; Cold War contestation paving the way for business and financial interests to reach a modus vivendi with organised labour through the 1960s in order to avert any threat of domestic socialism; and consequently the collapse of the Soviet Union in 1989 as a destabilising force because it took the brakes off corporate and financial self-restraint.

Another interesting aspect of the argument is the linking of administrations generally seen as being opposed to each others’ policies – the difference between Republican and Democrat being less decisive than that between Eisenhower and Reagan or Kennedy and Clinton. As Gary puts it, the feature of a ‘political order’ is that the opponents of the government also buy into it; it becomes the water in which almost everyone swims.

The FT review described the book as an instant classic. There are lots of talks and pods online for anybody who wants a taster. As the subtitle says, it’s US-focused; an analysis of how the neoliberal order got exported would be interesting. I highly recommend it – I read it in just a couple of days of travel. And it set me thinking about what the next political order might turn out to be….. 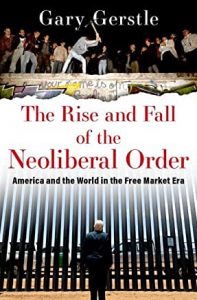