“Neoliberalism is a term which should, I think, not be used,” writes David Edgerton in his chapter in The Neoliberal Age? Britain Since the 1970s edited by Aled Davies, Ben Jackson and Florence Sutcliffe-Briathwaite. I agree. It’s handy shorthand for a philosophy of government that has had some prominence since 1979/80 but is used in ways that obscure rather than illuminate ideas. Some writers (eg Wendy Brown) using the term seem to class *all* economists/economics as neoliberal, yet lumping Joe Stiglitz with Eugene Fama really seems bizarre even though both think about how information shapes people’s individual economic decisions.

This conference volume is an exploration of the nuances and hence the question mark in its title. The broad conclusion is that something more complex and even contradictory than an ideological neoliberal movement has been going on. This is despite the rhetoric deployed by some UK politicians since Thatcher – the reality has been messier. As my colleague Peter Sloman puts it in his chapter on the welfare state: “The conjunction of anti-welfarist discourse with welfarist practice is not unique to the UK but is perhaps particularly striking in Britain.” We’ve never walked the talk fully – because politics. The editors’ intro sums this up nicely: not only have there been other intellectual influences than any neoliberal or free market ideologies, but to paint everything for the past 40 years as part of a grand neoliberal tide ignores “the role of economic and social change in setting broad constraints on the path of public policy.”

In fact, just revising a paper some co-authors and I are about to resubmit on the UK’s levelling up plans has made me glumly ever more certain that the dominant trend in UK politics is sheer incompetence, wired in to structures of government. We have a centralised state so determined to cling on to its power to determine policies that it repeatedly undermines the capacity of all the devolved and local governments and other agencies either to feed information in to the policy-making process or to implement the resulting decisions. Sovereign Westminster/Whitehall omnishambles.

Anyway, I haven’t read all the chapters yet but this is an interesting book, testing the neoliberal lens on a range of policies and perspectives, and finding it distorts the messiness of the historical landscape. 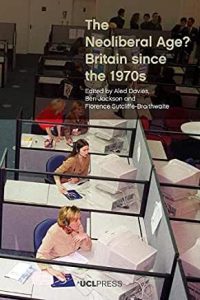 One thought on “More incompetent than neoliberal?”