Harold Demsetz’s essays in From Economic Man to Economic System are an interesting read. They range over a few subjects, including the selfish gene versus the selfish economic agent, and demographics. But most circle around the idea of property and markets, and Coase’s analysis of externalities on the one hand and firms on the other. Demsetz’s main aim, in my reading, is to argue that the proper scope of markets is wider even than in the free-market interpretation of the Coase theorem. It will be familiar territory to many readers. But there was one point that I’m mulling over, which is that transaction costs don’t determine what happens inside the firm versus in the market – rather, they may change the way firms are structured (more or less verticallyintegrated) but mainly affect the division between household and ‘economic’ production. “Zero transaction cost maximizes the importance of firms in the economic system by raising the percentage of total output of goods produced withing specialised production units as compared to the percentage  produced within self-sufficient households.” This is wrong – there are other reasons for firms to exist – but interesting. Another reason why economic analysis needs to bring household production fully into the picture. 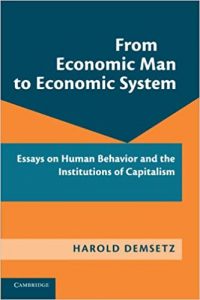 One thought on “Firms and households”