It has taken me a shamefully long time to read Will Page’s excellent book Tarzan Economics. Will was Spotify’s economist and before his move into the music business had worked for the Scottish Government. So he has the distinct advantage of being able to wear two pairs of spectacles to look at digital disruption, the policy lens and the lens of the disruptor. The term ‘Tarzan Economics’ refers to the leap businesses need to make from one vine in the business jungle as it descends, to another vine, in order not to crash to the ground. The book combines economic analysis of digitalisation with business advice, and carries off the combination. It isn’t in quite the same league as Shapiro and Varian’s now old classic (1998) Information Rules, but on the other hand is far more up to date and gives us a front row seat for what has happened in the music business.

It was always astonishing to me (see Sex, Drugs and Economics) that the music business reacted to the Napster et al threat by deciding it would be a good idea to prosecute their biggest fans (rather than responding to the demand for unbundling). As Will writes, “If piracy of a particular artist was increasing, the lawyers would be getting worried about intellectual property being stolen, whereas the promotion departments would recognise they had a hit on their hands.” The book identifies the real threat to any content business being the limited amount of time and attention we all have. There are nice examples of more sensible ways of responding (other thany trying to put your customers in prison). One is the Atlanta Falcons having made their stadium a pleasant environment with good, reasonably priced food and no rip-offs. Elasticity of demand is such that revenues per attendee have risen substantially, attending the game winning out for enough people over watching on TV from the La-Z-Boy recliner at home.

The book is structured around (as the subtitle has it) ‘eight principles for pivoting through disruption’. These include for instance tactics for working the dynamics of the long tail and how to price discriminate: voluntary donations can raise more than conventional pricing, for instance, the famous Radiohead experiment in voluntary payment for their album (followed later by release of a special boxed set) being one of the examples here. I found the chapter on the use of data, including Spotify examples, fascinating. There’s a lovely anecdote about Will visiting Richard Thaler, who came up with the answer after the company’s data scientists had failed to discover – despite intense data mining – exactly why Discover Weekly was such a success; I won’t spoil the story.

Will is one of the band of enlightened economists who can think more broadly than many. He gives the specific example here of the limitations of the cost-benefit analysis – for example in deciding whether to invest in a museum; the inspiration and education it provides need to be in the mix along with the visitor numbers and entry fees. Not surprisingly given his Spotify role, he argues that the music industry held on to its damaging old vine for a decade too long but things are looking rosy now – I’m not sure all of the music industry buys into this cheerful, new vine outlook. Nevertheless, it was one of the earliest industries to face profound digital disruption and the lessons are well worth pondering. As Will says, the aim of the eight principles and the examples in the book is not to proclaim answers but to help readers ask the right questions about their situation and pick the most appropriate strategies and tactics.

Whether you are involved in a disrupted business or just interested in digital economics, Tarzan Economics is a terrific read, very nicely written, and with the economic analysis sweetened with plenty of examples. Will will be appearing at the Bristol Festival of Economics talking about it in November. 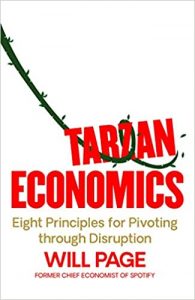