James Plunkett’s End State: 9 Ways Society is Broken and How We Fix It is a very readable addition to the increasingly compelling literature on the broken social contract. Other recent offerings in this mini-genre that I’ve read are Minouche Shafik’s What We Owe Each Other, Mark Carney’s Value(s), Martin Sandbu’s The Economics of Belonging, Raghuram Rajan’s The Third Pillar. There are no doubt others I’ve forgotten and certainly others I’ve not read. End State is a welcome addition, taking a somewhat different perspective.

For example, the first chapter focuses on over-concentrated markets and the adverse consequences in terms of power and inequality. The second goes on to consider the many ways in which concentrated markets act against the interests of customers, for example by penalising inertia or personalising prices or using dark patterns. Plunkett writes that regulators have been too slow to understand that their intellectual framework needed to adapt to these phenomena, too often assuming that with better information consumers could make better choices. “The deep intellectual underpinnings of public policy,” he argues, “have become unfit for purpose.” They have assumed for too long that the textbook model of markets, with limited market failures, reflected reality. The book advocates for policymakers using market design to shape specific markets so they serve people better – hard to argue with this, though hard to implement too.

The middle chunk of the book covers work: is there enough, why is job quality so low, skills, the precariat, and so on. I really like some of the suggestions – for example, a modern equivalent of the GI Bill to give many people a large-scale opportunity for upskilling, disrupting the pattern of assuming education is for academically-talented people between 18 and 25, and making way for other types of skill and definitely ‘non-traditional’ types of people. I’m less enamoured of the book’s advocacy of UBI, which seems to me the ultimate neoliberal, individualist policy for a neoliberal problem; better to tax progressively, simplify the benefits system (and make it more generous), and provide good public services. I can never understand why progressive people like this Peter Thiel policy so much. The book also argues for more leisure, a 35 hour or 4 day week. Fine for many people, although it overlooks the increasing utility many others get from their work. There’s an interesting chapter on the quality of life in old age, somewhat out of sync with the rest of the book.

The final section concerns modernising government. It clearly needs to be done, especially in the UK with an imperial centre trying to level up from the top down by making places compete with each other. I suspect, though, that the government we have at present is not going to be the one reviving democracy and firing the bureaucratic machine with new enthusiasm. This only points to a common issue with this literature: it’s terrific to have lots of brilliant authors identifying problems and suggesting fixes, but where is the political leadership and vision to implement a new social contract? The advantage of End State‘s focus on ‘fixes’ is that some of them might get done. We won’t see education and training reform at massive scale, but tougher competition policy – very possibly. 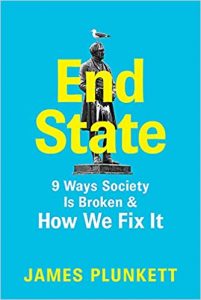