The Europeans: Three Lives and the Making of a Cosmopolitan Culture by Orlando Figes is a history of the emergence of a common European culture in music, art and literature in the late 19th century, told mainly through a narrative about three people: leadingopera singer Pauline Viardot (no, me neither), her husband, manager and also expert on Spanish art and music Louis Viardot, and the Russian novelist Ivan Turgenev, who ended up in a menage a trois with the Viardots.

For me, though, rather than this domestic drama, the main attractions were the railways, the publishing techniques and business models, the intellectual property debates, the great exhibitions. All the splendid artistic creations rested on these physical and institutional structures. Some artists and novelists learned to market themselves effectively to ensure commercial success – Zola was one for example, while poor Turgenev was far less worldly. The book even tells of a 19th century superstar economics effect, driven by technology on the supply side and the emergence of mass demand on the demand side, Sherwin Rosen avant la lettre. The Franco-Prussian war started to break the shared culture, and of course the first half of the 20th century torpedoed it. The book is a cracking read. 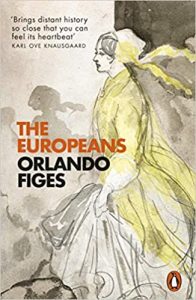