What future do AI and pervasive digital technologies have in store for us humans? This question is at the heart of George Dyson’s Analogia: The Entangled Destinies of Nature, Human Beings and Machines. I found this a fascinating book but am hard pressed to sketch its argument. It’s a melange of personal memoir (and what a life, my goodness), historical accounts of early Russian and western exploration and ancounters with native populations (that overlap with Dyson’s own experiences, particularly in and around Vancouver and the British Columbia coast), and reflections about the history and trajectory of digital technology.

I’m not sure whether I ended up optimistic that digital machines can never mimic the complexity of analogue life, nature. Or exactly the opposite, that they can’t yet but will evolve that way, having been set loose in the world replicating themselves – just as digital genetic code can create analogue humans. “There is no escaping the machines,” Dyson concludes. It’s impossible to encode particular analogue outcomes – Godel’s conjecture about different kinds of infinities is called in to explain why: “How is ‘better off’ defined? What value function defines a won?” And yet, the machines can play their own game.

I loved Dyson’s earlier book, Turing’s Cathedral – reviewed here. Turing’s Cathedral noted: “Turing proved that there is no systematic way to tell, by looking at a code, what that code will do. That’s what makes the digital universe so interesting, and that’s what brings us here.” Analogia is more enigmatic. But its theme is the same: what does the history of digital technology imply about its, and our, future? 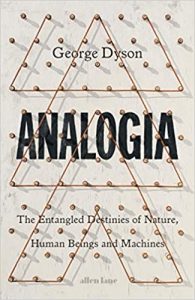