Reading Jill Lepore’s These Truths: A History of the United States has been quite a commitment – 800 pages and too big to carry around even as a paperback. It was well worth it. What a brilliant book.

Even at such a length, to cover the history of the US from Columbus to Trump requires a long focal length. The thread Lepore draws through the entire text is slavery and race, America’s original sin, and the intention of the Founding Fathers (“We hold these truths to be self-evident…”) and meaning of the American constitution. What does the founding dedication to equality mean in practice? But this is too reductive. This is a dense, rich book well worth the two weeks it has taken me to read.

Lepore is a wonderful writer, which helps. Consider the early section where she discusses the deal at the 1787 constutional convention to count a slave as three-fifths of a person for the purposes of determining states’ populations and therefore representation in Congress – a deal that gave southern states a lasting advantage in the legislature. During a break, Madison asked after the whereabouts of one of his slaves, Anthony: “Anthony had gone looking to be five-fifths of a person.” He had run away.

Or this: “Walter Lippman wore a three piece pinstripe suit the way a tiger wears his skin, but the cue to his acuity came in the raised eyebrows, as pointed as the tip of an arrow.”

The more modern sections are more familiar, but I like the way Lepore uses certain themes to ensure the book is more than one thing after another. The key ones for the 20th century are the media – the term “fake news” was in circulation in the 1930s, when Goebbels was an admirer of Edward Bernays, and both opinion polling and modern lobbying and campaigning were taking off – and computer technology. “Computers are often left out of the study of history and government, but starting at the end of the Second World War, history and government cannot be understood without them. Democracies rely on an informed electorate; .computers … would both explode and unsettle the very nature of knowledge.”

It turns out – now I look her up – Lepore has a podcast called The Last Archive, which must be worth a listen. I came across These Truths in a New York Times article about what Joe Stiglitz is reading – many other appealing reads on his list. 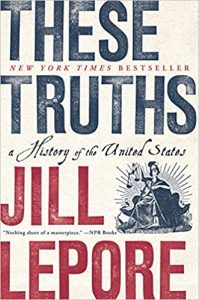 One thought on “Self-evident truths?”