Somebody at the University of Chicago Press has noticed how my mind works, and sent me Slices and Lumps: Division + Aggregation by Lee Anne Fennell. It’s about the implications of the reality that economic resources are, well, lumpy and variably slice-able. The book starts with the concept of configuration: how to divide up goods that exist in lumps to satisfy various claims on them, and how to put together ones that are separate to satsify needs and demands. The interaction between law (especially property rights) and economics is obvious – the author is a law professor. So is the immediate implication that marginal analysis is not always useful.

This framing in terms of configuration allows the book to range widely over various economic problems. About two thirds of it consists of chapters looking at the issues of configuration in specific contexts such as financial decisions, urban planning, housing decisions. The latter for example encompasses some physical lumpiness or indivisibilities and some legal or regulatory ones. Airbnb – where allowed – enables transactions over excess capacity due to lumpiness, as home owners can sell temporary use rights.

The book is topped and tailed by some general reflections on lumping and slicing. The challenges are symmetric. The commons is a tragedy because too many people can access resources (slicing is too easy), whereas the anti-commons is too because too many people can block the use of resources. Examples of the latter include redevelopment of a brownfield site where there are too many owners to get to agree to sell their land but also patent thickets. Property rights can be both too fragmented and not fragmented enough. There are many examples of the way policy can shape choice sets by changing them to be more or less chunky – changing tick sizes in financial markets, but also unbundling albums so people can stream individual songs. Fennell writes, “At the very least, the significance of resource segmentation and choice construction should be taken into account in thinking innovatively about how to address externalities.” Similarly, when it comes to personal choices, we can shape those by altering the units of choice – some are more or less binary (failing a test by a tiny margin is as bad as failing by a larger one), others involve smaller steps (writing a few paragraphs of a paper).

Woven through the book, too, are examples of how digital technology is changing the size of lumps or making slicing more feasible – from Airbnb to Crowd Cow, “An intermediary that enables people to buymuch smaller shares of a particular farm’s bovines (and to select desired cuts of meat as well),” whereas few of us can fit a quarter of a cow in the freezer. Fennell suggests renaming the ‘sharing economy’ as the ‘slicing economy’. Technology is enabling both finer physical and time slicing.

All in all, a very intriguing book. 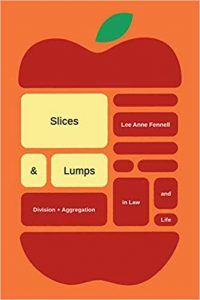