I thought Corinna Schlombs’ book Productivity Machines: German Appropriations of American Technology from Mass Production to Computer Automation looked like my kind of book, and I was right. This is a history of technology approach to the concept of productivity as it developed in the 20th century, in the frontier economy – the US – and as it transferred to Europe, especially Germany, and especially through Marshall Plan aid after the Second world War.

The book starts with the early steps taken by the Bureau of Labor Statistics to define productivity and measure it, work that ran alongside its other key activity of defining and measuring price indices. This early definition was clearly focused on technology adoption and use, although with an awareness that contextual factors (closeness to materials for example) would affect the measured production efficiency of bricks or shoes. The earliest work involved narrative accounts of production methods, with surveys and the development of an index, coming later.

In the same period, Henry Ford started to reshape the context for thinking about productivity with his famous $5 wage, enabling the workers who made cars to think about affording to buy them. This paved the way for a wider understanding of productivity in the US as involving the production system including methods of management and – by the postwar era – the American way of life with relatively egalitarian social relations and consumer affluence created demand and growing markets.

The 1920s saw many German visitors touring US plants to understand productivity and took away widely varying messages. Many industrialists concluded that the technology and organisation of the factory was the central issue, others argues workers should work harder and longer, while some – particularly unions – did appreciate the Ford message. Postwar, however, the influence of the US through its aid to Germany meant the introduction of a programme of visits by German workers and industrialists to the US intended to land the message about the importance of the social framework. The distinction between US and German approaches to productivity subsequently centred on the role of unions – local in the US, national collective bargaining for the whole industry in Germany.

The book ends with chapters on IBM (whose welfare capitalism fit well into teh German context) and US computer technology driving automation in the 1960s. Automation was seen differently on the two sides of the Atlantic – as a driver of productivty in the US and as a threat to employment and eater of scarce capital in Germany. By 1971 IBM was dominant in computer markets across Europe, except, at that stage, the UK.

The bottom line I take from the book is that ‘productivty’ is a socially-embedded construct whose meaning has changed over time – something to bear in mind as we fret now about low productivity. Schlombs ends with the question of whether its meaning will change again now – whether ‘productivity’ will be driven by quality improvements – even quality-of-life improvements – and not either working ever harder or consuming ever more. “Productivity Machines has shown that American expectations of economic growth and higher standards of living through increased productivity from technological improvements were unique to the American model and not inherent in capitalist economic relations.”

So, a very interesting read and useful contribution to the inter-economist debate raging about the OECD productviity slowdown. 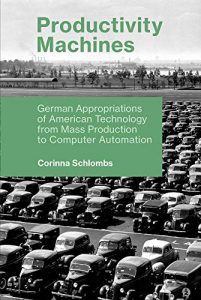