Now that I’m paddling at the edge of the inter-disciplinarity ocean – dangerous waters – I read – on the recommendation of esteemed colleagues – Metaphors We Live By (1980) by George Lakoff and Mark Johnson. I gather it has been highly influential, and it was indeed stimulating read. However, I struggled with parts of the argument, which started brilliantly: we use metaphors, often informed by our bodies, in language and thought. ‘Up’ and ‘forward’ are powerful when incorporated in metaphors, because we stand up and walk forwards. I really enjoyed being prodded to think about the use of language and what it would mean to take metaphors seriously. Why does ‘ your argument has a solid structure’ work but ‘your argument is covered in gargoyles’ not? Why can we have raw facts and half baked ideas but not sautéed or poached data?

However, I struggled with the labelling of some ways of speaking as metaphors at all. I can see ‘argument as war’ is one. But is ‘inflation is an entity’? It’s an analytical construct for sure, but it isn’t exactly not a thing either. So is ‘inflation is lowering our standard of living’ really a metaphorical construction. Are ‘time is a resource’ and ‘labour is a resource’ metaphors at all? The further I got into the book, the less I was persuaded.

Evidently the book played into the objectivism vs relativism debate, and the authors sensibly accept that the ‘real world’ clearly constrains our conceptual system, although they are on the relativism end of the see-saw. As the title of chapter 27 puts it: “How metaphor reveals the limitations of the myth of objectivism.” They argue that the way we use language means objects (out there in the real world, as it were) are entities relative to our interaction with the world, and our projections onto it. Properties of objects are interactional rather than inherent, in their view. No doubt this is philosophically incoherent, but I’m not sure why there can’t be inherent properties as well as those we perceive through our interactions with the world and categorise, metaphorically or not.

The book ends with a paragraph on economics which is half spot on: “Political and economic ideologies are framed in mataphorical terms. Like all other metaphors, political and economic metaphors can hide aspects of reality. But in the area of politics and economics, metaphors matter more because they constrain our lives.” I think Deirdre McCloskey (The Rhetoric of Economics) or Albert Hirschman (The Rhetoric of Reaction) would agree. However, this coda seems half gibberish too, at least to this literal-minded economist: why is ‘labour is a resource’ a metaphor because it fails (as a metaphor) to distinguish meaningful from meaningless labour?

Anyway, among other reading, Meetings with Remarkable Manuscripts by Christopher de Hamel is marvellous. I laughed and I cried (literally, not metaphorically). I only quite enjoyed Cees Nooteboom’s Roads to Santiago. I read Cass Sunstein’s latest, The Cost Benefit Revolution, out in September – when I’ll review it. I’m spoilt for choice for my next one, as the in-pile is teetering at the moment. When I’m super-busy, as these at months have been, acquiring a new book seems to be a purchase of the implicit time to read it. If only! 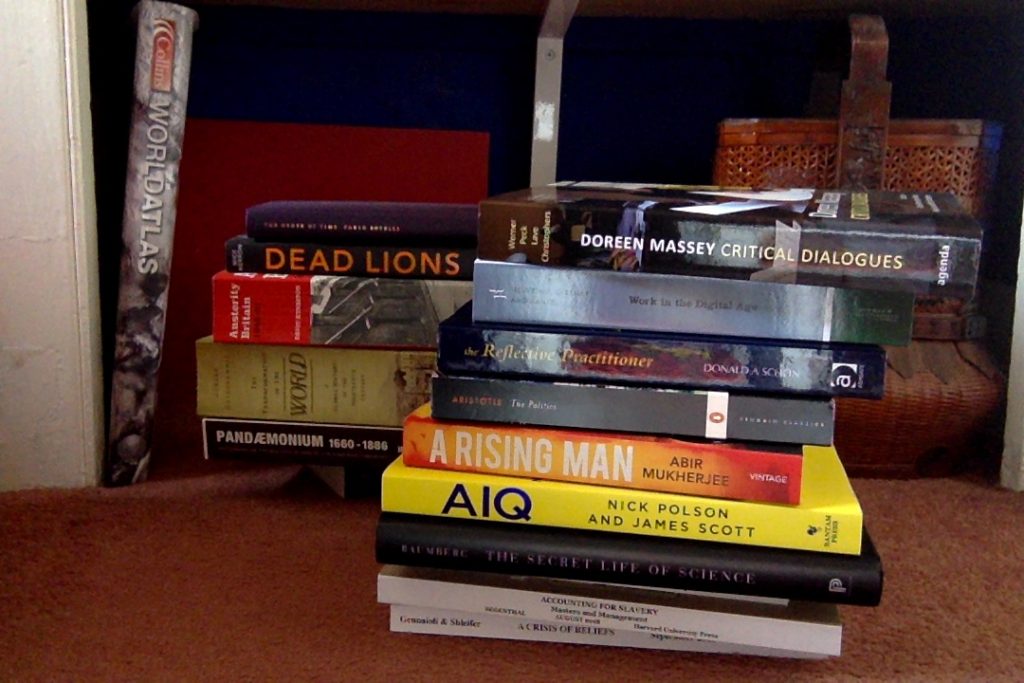 2 thoughts on “Is my argument covered in gargoyles?”