One of the most exciting moments in my World Economic Forum experience was meeting Daniel Dennett, who was the first person to turn up to hear me talk about measuring the economy – he’s the distinguished Father Christmas-bearded chap on the right. 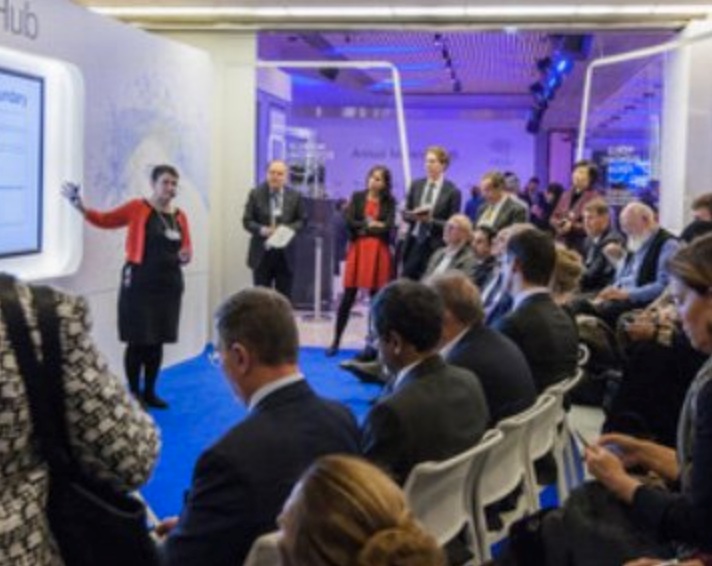 It’s only quite recently that I read his Intuition Pumps and Other Tools for Thinking. Now I’m half way through the more recent From Bacteria to Bach and Back.

It’s interesting in part because of the read-over to economics. For example, the book talks about the reverse engineering approach to evolution – how come this creature has this feature? “Reverse engineering is methodoloigcally committed to optimality considerations,” Dennett writes. (NB this does not mean simplistic ‘just so’ stories.) The control circuits of an elevator have been top-down designed for good reasons, while the control proteins of bacteria have been bottom-up ‘designed’ (that is, evolved in their environment) for good reasons too. In economics optimisation is presented as an assumption about top-down choices, but maybe it’s more useful to consider it as a bottom-up description of how people decide to act, given their environment.

When the book turns to information – ‘a distinction that makes a difference ‘ – Dennett makes the link with economics explicit. Like other biological information, economic information is semantic information of some us to us. How useful depends on individual context – the value of information lies in the receiver. This means it can’t be measured in a non-arbitrary way (although its usefulness can often be empirically confirmed). Dennett also argues that semantic information does not need to be encoded to be useful, obvioulsy a claim of relevance to the debate about AI. (He spoke about this in Davos.)

This is interesting as it was an issue discussed in the recent ESCoE seminar by Richard Heys (on a paper I co-authored) about the price of telecommunication services. As a sort of thought experiment, we calculated a unit value index for these services – revenues divided by the volume of data used in bytes. This index declined 90% in the five years to 2015. But, one strand of the discussion went, not all units of data are equal; some are far more valuable than others. Of course. But the value is in the eye (or bank account) of the user, and what other signal of value could we select other than the decision to use?

This reminds me that I’ve been meaning to write, since I read it in October, about Jason Smith’s interesting e-book A Random Physicist Takes On Economics. I find it very hard to write about books in the Kindle app as I can’t page through them (though it seems there’s now a paperback); so all I will say is that it’s worth reading for its observations on the methodology of economics. I share some of its reservations – above all, the trouble macro has with aggregation. It also made me think about the role of context or environment, and why this might be more influential than individual choice processes in determining economic outcomes. Smith alludes to the literature on biological market theory, pointing out, though, that this does not rest at all on the utility of biological agents, be they pigeons or fungi.