There are plenty of ill-informed criticisms of economics, alongside the very valid criticisms of the subject. It’s frustrating if one wants to see the discipline move in desirable directions – a higher proportion of women and people who aren’t white & middle class, less ‘boys’ toys’ abstraction, more open (again) to history, sociology and other related subjects, etc – because responding to ill-founded critiques is such a waste of time. Yet the false myths need busting if real reform is to take place.

A recent article by Larry Elliott in the Guardian was outstandingly ill-informed. So much so that it prompted some of the UK’s most esteemed economists to write an excellent reply in Prospect. Their most important single point is, perhaps, that the econ-bashers are feeding the dangerous current in politics of disparaging expertise. We economists need to be duly modest about what we know, but we certainly know more than, say, some current members of the Cabinet.

I tweeted the link to the Prospect article, which led someone to come back on Twitter with this.

Here is the McCloskey quotation: 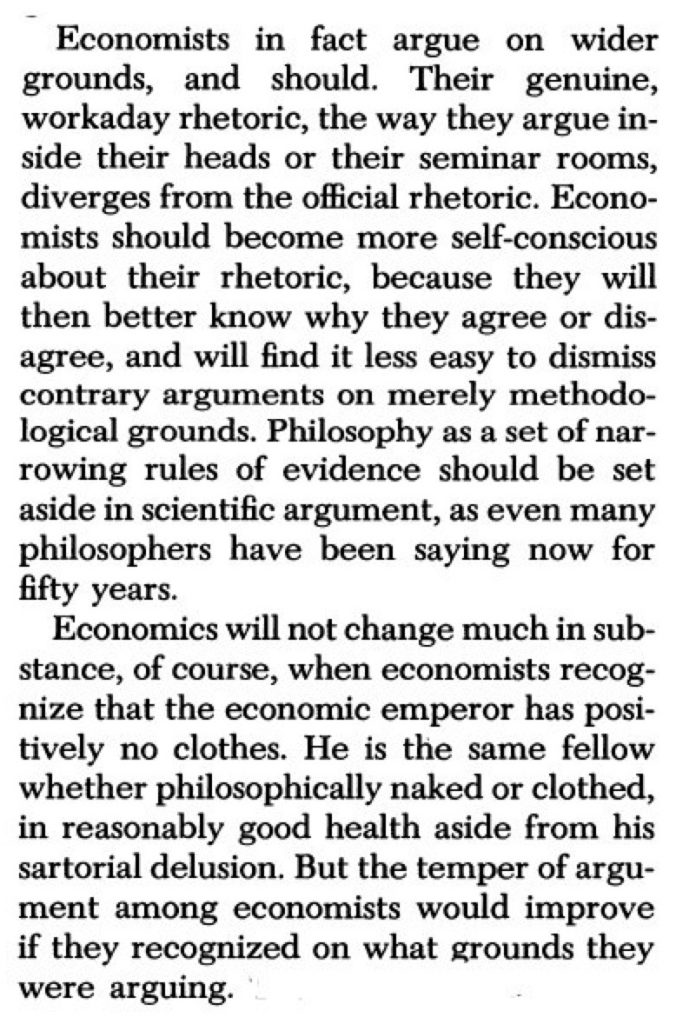 So I turned to my copy of McCloskey’s 1985 Rhetoric of Economics and particularly the postscript to the 1998 edition. There she is at some pains to correct readers of the 1st edition who’d concluded she is ‘against’ mathematics in economics, saying: “A lot of good work gets done in economics, new facts and new ideas. Economists are not stupid or lazy, not at all. I love the field. I belong to the mainstream.” Her target is what she describes as the ‘sandbox for boys’ games’ – ultra-mathematical and abstract – far from a wholesale criticism of maths in econ. Famously, she also condemns the unthinking worship of statistical significance – and indeed any economist worth their salt will also be absorbing the recent papers by Alwyn Young and by Ioannides et al in the Economic Journal.

Still, one can’t plonk The Rhetoric of Economics (remember, pub. 1985) down as a killer retort to the economists’ demolition of the latest dangerously misleading attack. As the Prospect economists note:

The way economics is done has been transformed in the past 30 years with an empirical revolution, meaning we now use fine-grained data on individuals, households and firms. In a recent survey of published work in top journals, over three quarters of papers analysed data collected either by the researchers themselves or from secondary sources. Economists provide evidence, increasingly using randomised control trials, or big data. Often this leads to theories being supported or knocked down: this is the bread and butter of modern economics.

My 2007 book The Soulful Science described a lot of the change since the 1980s this refers to. Perhaps it’s too much to hope for, but I do wish people who condemn economics would actually pay more attention to #whateconomistsreallydo