I’ve very much enjoyed Manu Saadia’s Trekonomics: The Economics of Star Trek. Many economists are fans of science fiction, detective fiction, or both (as I long ago described here) and I’ve long been a fan of Mr Spock, indeed posting this sticker in the front of my copy of Theil’s Principles of Econometrics. Paul Krugman made a similar link in his well-known account of being drawn to economics by Isaac Asimov’s Foundation series. 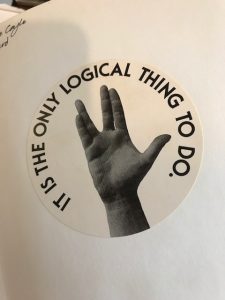 Trekonomics joins Star Trek: The Human Frontier by Michele and Duncan Barrett as an excellent book about what the franchise says about society. It’s an interesting, enjoyable riff about the economics of the series: the implications of abundance, what work means, the absence of money, the implications of the replicator. I most enjoyed a rant about the anti-humanism of Paul Ehrlich’s 1968 The Population Bomb (and besides, it was completely wrong), and a section about the psychology of people in a society where there is no poverty, and no inequality of access to material resources (reputation and Star Fleet rank being another matter). There is also a chapter about the tragedy of the commons which might well turn up in my teaching next semester. This is a problem not even the wise and benign Federation can solve.

Manu Saadia argues that the calm and rationality of Vulcans, and indeed the humans in later series of Star Trek, are hard for 21st century humans to empathise with. We don’t care about these perfect characters, he writes. Maybe it’s because I’m an economist, but it’s Spock, not Kirk or any of the humans, who is my hero. The Vulcan greeting could be an economist’s motto.

3 thoughts on “Live long and prosper – economists and Vulcans”