It’s no easy task to write a reasonably concise (about 200 pp), highly readable, well-informed synopsis of the big trends in global economic history, along with an assessment of how these are likely to play out in the near future. Stephen King, HSBC’s Senior Economic Adviser, has given us such a book in Grave New World: The End of Globalization and the Return of History. As the title indicates, it isn’t an optimistic book. But more of that in a moment.

The book starts with an extract from a speech by Joseph Chamberlain as Secretary of State for the Colonies in 1897. It was an ‘end of history’ speech: in ruling the Empire, he sdai, “[W]e are fulfilling what I believe to be our national mission, and we are finding scope for the exercise of those faculties and qualities which have made us a great governing race….” The Introduction segues into the inevitability that empires that rise subsequently fall. The Whig interpretation of history is still wrong.

The remainder of the book is similarly ambitious and wide-ranging, although consequently covering vast events in a page or two; this can inevitably feel breathless. But this is a worthwhile price to pay for the breadth of reference. For instance, few books by financial market economists about global trends manage to include reference to the work of development economist Arthur Lewis (although I’d like to mildly complain that he’s referred to here as the first black academic at the LSE; he was the first black professor appointed in the UK, and that was by the University of Manchester, where my office is in the Arthur Lewis Building).

The other merit of a wide-ranging book of course is that you learn some things you didn’t know. For me, it was the detail about China’s extension of its economic and political reach in Asia and beyond. For all that China’s path will be turbulent (see Martin Wolf in the FT today), there can be no doubt about where the centre of gravity of the world economy is moving.

The final part of Grave New World is titled ‘Globalization in Crisis’. It describes the multiple weaknesses of existing global institutions but concludes there’s nothing better around than sticking with, and improving, the WTO, the EU, NATO etc. I think one has to forgive the un-stirring conclusion – I certainly have no better ideas, although in glum moments (there are may, watching the news) I rather fear that events in the near future will destroy the existing institutional landscape leaving no option but to go back to the drawing board.

The book ends even more pessimistically than me, however, with an imagined Ivanka Trump Inauguration speech in 2044. Oh my, history is definitely baaack. 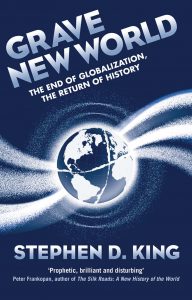 One thought on “The big picture – and it isn’t pretty”