Well, we will find out tonight I suppose, with the exit polls from the first stage of the French presidential election. After Brexit and Trump, I’m bracing myself. It seemed a good week to read Sudhir Hazareesingh’s How The French Think, out now in paperback, and I’ve greatly enjoyed it. I was a teenage existentialist (just like Sarah Bakewell), deeply influenced by Simone de Beauvoir’s The Second Sex, and a Francophile since primary school. Who knows why? It might just have been the most exotic place I could imagine growing up in a small Lancashire mill town. So How The French Think has been just the ticket for my reading pleasure. The book has all kinds of nice details (like the fact that hedonist thinker Julien Offray de la Mettrie died form over-indulgent consumption of pheasant and truffle pate. Or that Jules Verne had an early work (not published until 1994, as his publisher turned it down), Paris au XXe Siecle, a grim dystopia dominanced by Finance and Machinery and featuring a Demon of Electricity.

One of the great puzzles about France for an economist, however, is how it combines being uniquely resistant to economic logic with being a rather successful economy. This

combination doesn’t always pay off. As Jean Tirole points out in his Economie du Bien Commun (out in English later this year), the absence of economic analysis as applied to the labour market explains the high unemployment rate, particularly for young people. However, the average level of productivity is higher than in the UK, there are many successful multinationals, and the quality of life (if you have a job) remains high. This doesn’t stop the French being consistently pessimistic – among the (self-reported) unhappiest in the world given their average level of income. And as the electoral polls – and no doubt results – will show, a large proportion of voters are attracted to candidates promising to defy conventional economic wisdom (not to mention economic reality) with greater protectionism and far less of the market.

The book concludes: “It would be wrong to give the impression that xenophobia and intellectual closure have become the exclusive traits of the French today ot that they will be dominant forever.” But …. there are immense contradictions. Strong believers in the State in the abstract, but now firmly of the belief that it is too distant from the citizens. Against the ‘Elite’ but still profoundly elitist by instinct, “decisive architects of an economically liberal Europe” and yet “profoundly contemptuous of capitalism”. No wonder this election feels so uncertain. 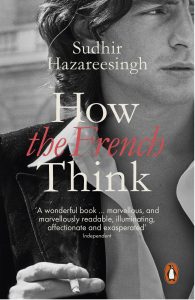 3 thoughts on “How do the French think?”