Yesterday was the meeting of the European Advisory Board of Princeton University Press, of which I’m a member along with some very distinguished people from other disciplines. It’s always inspiring to see the Press – my own publisher – making such a success (in terms of numbers of books sold, revenues and global reach) of high quality, peer reviewed books with an emphasis on accessibility to non-academic readers. (In fact, on the tube on the way there as I stood looking around the carriage, there were at least half a dozen people within sight reading books. I think physical books are baaaack bigtime, and the figures seem to agree.)

We had a discussion about the obvious: what do Brexit/Trump/dislike of facts and experts imply both for universities and for a scholarly press? David Runciman made the point that we academics see ourselves as producers of knowledge, a public good in a knowledge economy. The votes suggest half the public doesn’t agree, whether they are right or wrong.

He also strongly criticised the ‘impact agenda’ which is now part of the Research Excellence Framework. I somewhat disagree with this, as it seems entirely healthy for academics to have to think about the outside world and how their work meshes with it. I do agree with David’s point that the way ‘impact’ is interpreted in practice favours the London universities, Oxford and Cambridge, as people are often expected to demonstrate their ‘impact’ through contacts with “elite networks of influence” (in his words). In the UK, they are massively London-centric. However, if so many citizens fail to see any positive spillovers from academic work – knowledge production – it’s all the more important to think about how to improve and demonstrate impact in ways that don’t centre on influencing Whitehall and Westminster.

An eminent political scientist, David said the book he was turning to to understand political trends is Democracy for Realists. I must add it to the ‘to read’ pile. 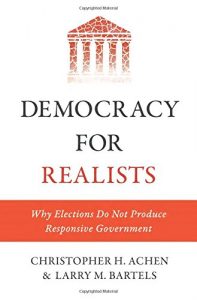 3 thoughts on “Knowledge as a public good – honest!”