One of the most brilliant history books I’ve ever read is the late Tony Judt’s Postwar: A History of Europe since 1945. It was revelatory, not just because he was a brilliant writer, but also because of that framing of modern history on this side of the Atlantic as a story of all of Europe. The Iron Curtain turned out to have been an internalised barrier too. So Judt was able to reveal the epochal importance of German reunification and membership of the EU for other central and Eastern European countries. For many of us ‘Remainers’, the failure of the official campaign in the UK’s disastrous EU referendum to remind voters about how hard won modern Europe has been was inexplicable.

I’ve just finished Europe Since 1989: A History by Philipp Ther (a translation from the German original). While not on the same scale, Ther acknowledges his debt to the way Judt framed the continent as a whole. Having said that, this is a book focusing largely on the experience of the former Soviet bloc, and exploring the reasons for the different outcomes for different countries. One message is how much earlier history influences the present, for example in the differing cultural and social attitudes to entrepreneurship, or conformism. Another is the extent to which east Germany (and Berlin until relatively recently) suffered from what Ther describes as “the most radical shock therapy in postcommunist Europe.”

I found the detail interesting – Ther is obviously familiar in great depth with many of the former planned economies. I had one big frustration, which is that the entire post-1989 history is interpreted through the prism of ‘neoliberalism’. I agree with my colleague Colin Talbot that this is largely used as a generic term of abuse, one often aimed at economists in general. Ironic, really, when applied in the context of the dramatic economic collapse of the non-market economies. Ther isn’t as bad as many users of the term, in that he does appreciate that there was a specific ideological project – spearheaded by Reagan and Thatcher, supported by a group of economists. However, while talking freely about ‘neoliberal hegemony’, he also writes: “The political practice of reform in eastern Europe always diverged from pure theory,” and “Brussels’ agenda was not strictly neoliberal,” (writing about transfers of funds to the former communist countries amounting to many times the amount of Marshall Aid). He continues: “Overall, European integration and its attendant programms were a tremendous success.”

So one ends up with the impression that the first neoliberal wave was Jeff Sachs with his ‘shock therapy’ theory, and the second was Vaclav Klaus. It’s a bit thin, although of course the ‘shock therapies’ were simplistic and indeed quickly disowned by many economists. So although at least this book doesn’t claim all of economics, the mere idea of economic reform in a disintegrated planned economy, is neoliberal, it’s an analytical frame that hinders rather than helping understanding of post-1989 Europe. 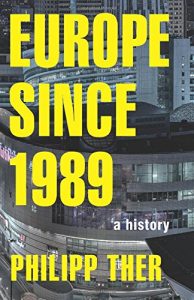